Aries: tries to do everything at once, doesn’t know when to stop and take care of themselves, bends over backwards for everyone even if someone did them dirty, has entirely too much on their plate

Taurus: idealistic, spends a lot of time trying to impress others, doesn’t like to apologize, eating is a coping mechanism or just addictive personalties in general, a tad codependent

Gemini: the most flip floppy people ever, what’s today’s mood?, never apologizes, in denial 90% of the time, their way is the highway, desperately needs a break, they have a hard time setting goals because their goals scare them

Cancer: the literal meaning of I’ll give you the shirt off my back, isolates themselves in fear of someone hurting them, wants to change but is scared of change, complains a lot but never takes advice people give them

Leo: no one takes them seriously because they feel they always have to portray themselves as the fun one, is actually really sad inside, honestly needs a hug, exhausted always, a crackhead

Virgo: can dish it but can’t take it, rushes everything, anxious, plans their future but forgets to live in the moment, sometimes ignores their friends because they have so much on their mind, talks about themselves a lot and sometimes forgets to ask the other person how they are

Libra: solves everyone’s problems but their own, is actually really sad and lonely, gets easily heartbroken but tries not to show it, will do anything to justify bad decisions, honestly just wants everyone to love them but doesn’t really love  their self

Scorpio: easily set off, will give anyone the cold shoulder at any time even without reason, keeps a lot in, so observant that they often times find out things that hurt them, too many “what ifs” swirling in their heads, has trouble showing their true selves

Sagittarius: impatient, brash, commitment issues, body issues, doesn’t realize they don’t need to change for anyone, has a lot of different goals to a point where they get overwhelmed, just wants to disappear and do what they want without anyone questioning them

Capricorn: scared people won’t like them unless they’re at the top of their game 24/7, takes a LOT for them to talk about their feelings, secretly struggling, fake happy, needs a plan but doesn’t know what that plan is, confident but insecure at the same time, wants to be stable but sometimes wishes they could drop everyone’s expectations of them and live normally

Aquarius: gets heartbroken like 30 times a week, trust issues, can be unmotivated and disinterested, feels they have to adapt to every person they meet so they can be liked, doesn’t know how tap into their emotions despite being very intuitive, confused, expects little

Pisces: empathetic often to a point of no return, plays the victim, doesn’t know when to say no, cynical, hermit, is very impatient, trusts everyone too much, can be secretly very critical and judgmental, can only tolerate maybe ten minutes of social interaction, needs a lot of validation

shut up annaastrologythe signs ashomestuckim sorryactually no. no im not1k5k10k
13,088 notes
Loading...Show more notes
Reblog
The Signs as Color Palettes!
the signs aszodiachomestuckhomestuck aspectsariestaurusgeminicancerleovirgolibrascorpiosagittariuscapricornaquariuspiscesthis is a shitpost but if y'all wanna use it as an art challenge that's fine too LMAOOO
10,949 notes
Loading...Show more notes
Reblog
signs as nebulas

someone has probably done this before but whhaateverminecraftshitpostzodiacsigns asthe signs ashomestucki'm on a roll with these posts todaylong post1khall of fame
5,593 notes
Loading...Show more notes
Reblog 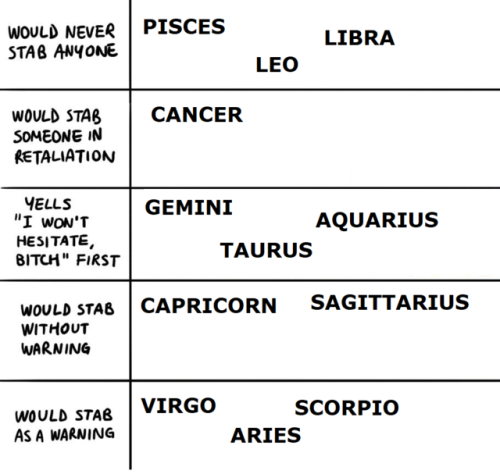 not taking constructive criticism because nothing can improve this 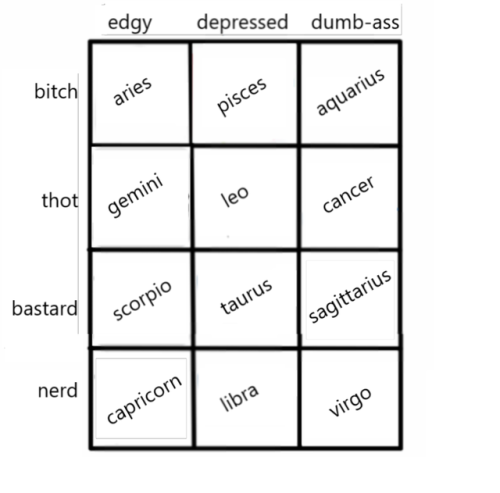 You can always tell which sign belongs to the person making one of those “The signs as___”, because they’re always like-

what the rising signs are attracted to

scorpio: someone willing to divulge their whole life to them, honesty, unique or roman noses, some dangerousness oo, little bit of drama or conflict, “forbidden love”

sagittarius: nice thighs/legs/ass, spontaneity, big dick energy (lol jk), a cosmopolitan, people who will experiment, not big into commitment, people who love travel or are from a different country or place

* if you can’t relate, maybe take a gander at your venus/mars/7th house sign to see if that’s a better fit *

Aries: [the entirety of the salt and pepper diner skit]

Cancer:  “I’ll keep all my emotions right here and then one day I’ll die.”

Leo: “Sometimes babies will point at me, and I don’t care for that shit at all.”

Virgo: “This is an on-fire garbage can. …Could be a nursery. “

Libra:  “You have the moral backbone of a chocolate eclair.”

Pisces: “Everyone get out of my way! I just want to sit here and feed my birds.”

Aries: The seriousness of adulthood crashes on the shores of children. How easily youth reminds us not to take things seriously.

Taurus: What worked for someone else may not work for you. The taxonomy of human problem solving is endlessly complicated, but susceptible to practice.

Gemini: Do not be discouraged when a new student blows past your level of expertise. You can’t know what preparations they had beforehand. Stay confident and full of a desire for revenge.

Cancer: Information springs from unexpected wells! A small rock will teach you to read.

Leo: Don’t be fooled Leo, money is just as noble a goal as anything else. And its only con-artistry if a judge gets involved.

Virgo: Brazen stubbornness cannot be stopped, but it can be aimed. Someone who simply bashes their head through walls should be paired with someone who can guide them.

Libra: If someone is going to stop you from wearing your blanket all the time like a  big cloak, they will have to do it physically.

Scorpio: Look sometimes there’s no clever trick behind the challenges you face. Cleverness is good, but sometimes you just have to kill a motherfucker with your bare hands.

Ophiuchus: Due to an unfortunate philosophical development, the only moral choice a human can make now is to become a furry.

Sagittarius: Everyone has to let their guard down eventually. With patience and persistence, that pie will go into that face.

Capricorn: A rhythm is important, yes perhaps necessary, but you need to be willing to put in the work to maintain that rhythm. The world is a jam session and you must groove.

Aquarius: Just start saying yes to things until the cops show up.

Pisces: Any activity is improved by coziness. Do anything you can to ensure that you are cozy. The pursuit of cozy might as well be the meaning of life.

aries: “i have the choice of being constantly active and happy or introspectively passive and sad. or i can go mad by ricocheting in between.”

taurus: “the floor seemed wonderfully solid. it was comforting to know i had fallen and could fall no farther.”

gemini: “i want to live and feel all the shades, tones, and variations of mental and physical experience possible in my life. and i am horribly limited.”

cancer: “perhaps some day i’ll crawl back home, beaten and defeated. but not as long as i can make stories out of my heartbreak; beauty out of sorrow.”

leo: “i want to taste and glory in each day; to never be afraid to experience pain, to never shut myself up in a numb core of non-feeling, or to stop questioning and criticizing life and take the easy way out.”

virgo: “what horrfies me most is the idea of being useless: well-educated, brilliantly promising, and fading out into an indifferent middle age.”

libra: “i felt my lungs inflate with the onrush of scenery - air, mountains, trees, people. i thought, ‘this is what it is to be happy.’”

scorpio: “if the moon smiled, she would resemble you. you leave the same impression of something beautiful, but annihilating.”

sagittarius: “i wanted change and excitement and to shoot off into all directions myself, like the colored arrows of a fourth of july rocket.”

capricorn: “i took a deep breath and listened to the old brag of my heart: i am, i am, i am.”

aquarius: “i shut my eyes and all the world drops dead. i lift my lids and all is born again.”

pisces: “here i am, a bundle of past recollections and future dreams, knotted up in a reasonably attractive bundle of flesh. i remember what this flesh has gone through; i dream of what it may go through.”

Aries: 風光る(Kaze Hikaru) A warm spring breeze which follows the winter. Spring’s cherry blossom breath flushing over your face. A warm spring kiss after the freeze of winter air.

Gemini: 本音 (Honne) & 建前 (Tatemae) Ones true self (honne), true soul and the facade, the mask they wear in public (tatemae).

Cancer: なつかしい (Natsukashii) The feeling of nostalgia. Desiring and missing something. Happy memories of the past. Transcient state of mind recollecting the best of the past.

Leo: 花笑み (Hanaemi) A flowering smile. a smile as beautiful as blooming flowers, opening up their lush petals. inspiring people to be happy.

Virgo: 真面目 (Majime) A personality possessed by one who is hard-working, earnest, punctual, honest. A reliable person who will get things done without causing a ruckus, good morals.

Libra: 逢りば兄弟 (Ichariba Chode) Meeting someone and instantly considering them a friend, or even like a sibling. Instantly harmonizing with another.

Scorpio: しのびなく(Shinobi Naku) To shed silent tears, to hide your tears from others. Like a ninja or warriors cry.

Sagittarius: 幽玄 (Yugen) An extension of feeling “awoke”, an awarness that there is more to this universe beyond temporal existence which triggers deep, mysterious feelings. A philosophical feeling, close to touching a profound reality which underlines our extistence.

Capricorn: 頑張る (Ganbaru) Working hard, going above and beyond, reaching your full potential beyond belief. Perservering through tough times.

Aquarius: 合縁奇縁 (Aienkien) An unusual couple, brought together by some sort of “quirk of fate”. Strangely united but happy together.

Pisces: 鏡花水月 (Kyoka Suigetsu) “Flower in the mirror, moon on the surface of the water” Something you can see, but cannot touch, like a mirage. Beautiful dreams that are unattainable. Beauty that can only be felt, not touched.

The signs asastrologyastrology memeemoji builderemojiI saw an opportunity and I took itIf you spend more than three hours on something is it still a joke??? asking for a friend
20,888 notes
Loading...Show more notes
Reblog