brushing riots off as senseless violence and refusing to listen to black people and activists about the situation makes you inherently racist actually. presenting yourself as woke or progressive or non-racist while actively talking over and/or ignoring poc is inherently racist. refusing to try to understand why people are reacting the way they are and going into your internet echo chamber of other fake-woke white people,,,,,,,,, like the list goes on & on. if you’re not gonna try to listen to black people or understand why people are doing what they’re doing, you need to stop pretending you care about black people and black lives

Halsey hits at something that’s bothered me for years. Celebrities aside, this whole social media “influencer” movement is superficial crap. None of them speak to meaningful issues. You want to influence? Teach people about racial or climate injustice, wealth inequality, bigotry, or health care. Literally anything substantive.

I don’t want your lululemon shorts or your shitty face wash. F*ck off with your capitalist ass 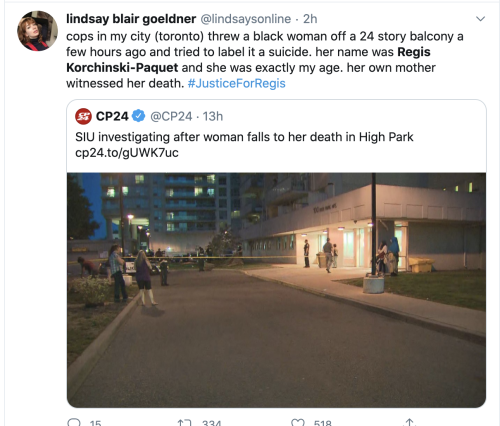 ﻿say their names. tell their stories.

Akim Aliu was on The Today Show this morning May 28, 2020. The NHL provided a much too late, bare minimum statement to the show.

The NHL has not acknowledged Akim’s article on NHL platforms to date as of the writing of this post. You can find Akim’s interview on The Today Show’s website.

Maaaan, where were all these White folks during the past 8 years that Black Lives Matter has been protesting? Because, honestly, this shit is irritating and infuriating.

Some of y'all only give a shit about looking “woke” and “progressive” to Black folks and your White counterparts, and it shows. Y'all need to cut that shit the fuck out. You only hurt our cause when you show your ass like this. Allyship is not allyship when it’s performative, and even if you’re an “ally,” you’re still an oppressor. And y'all need to realize that.

Do better, dammit, or don’t bother getting involved in our movement at all.

“I am not going to stand up to show pride in a flag for a country that oppresses black people and people of colour,”

“aLl LiVeS mAtTeR” Yeah, no shit. That’s the whole point. That black lives ARE lives. Yet are disproportionately diminished in value by society, and literally executed by police.

That’s why we say #BlackLivesMatter.

there are riots in minneapolis. the state is, quite literally, on fire. what started as a peaceful protest in the name of George Floyd has turned into a fight for civil action and civil equality. police on scene were caught on multiple cameras and seen by everyone there throwing teargas, flashbangs, and firing rubber bullets at protestors. they brought violence, when the people simply wanted to be seen and heard. to be protected.

black lives are people stolen at a glance, they are being ripped from their families as if it was normal; George Floyd, Ahmaud Arbery, everyone. acab or nothing. fuck cops.

bring awareness to this. please. let everyone know.

if you know/are a protester in Minneapolis right now - arm yourself with traffic cones and water.

once tear gas canisters are thrown cover them with the traffic cone and pour water on them. it will eliminate the gas. stay strong. keep fighting.

I am sorry for this sudden message, but I am uncharasterically livid, and just need to get something off my chest and make some things clear.

I am fed up with the racism. Whether it be to Hispanics, Asians, Brown people and, God, BLACK PEOPLE

If you do not support BlackLivesMatter, get the fuck off my blog.

If you are a Trump supporter or side with Police brutality, get the fuck off my blog.

If you believe “I hate racists” is controversial and up for debate, get the fuck off my blog.

My content never was and never will be for you.

His name was George Floyd.

And America was his, and many of his brothers’ and sisters’, murderer.

trump when people are protesting that they have to stay home with armed weapons: these are very good people :)

trump when people are protesting an innocent murder of a black man that was caught on camera, unarmed: these are thugs and i am sending in the national guard in, thanks!

The stories I see about police on the United States are scary. Are things as bad as they look on the news? Do they all have guns all the time? What is your experience with police?

I’m going to assume this is in reference to George Floyd and/or similar occurrences of police violence against people of color.

Yes, yes, and my experiences don’t particularly matter except to illustrate how problematic others’ experiences are by comparison.

5 times I was stopped on my motorcycle for speeding. I, uh, definitely should have received tickets. I got warnings for all of them after having a friendly chat about how rare it was for women to ride sport bikes and promising to pay better attention to speed limits. Two of these times, the officer asked if he could take a picture of me/my bike (I admittedly looked very cool).

4 times I was stopped in my car. I was ticketed twice for speeding, though both times they wrote the ticket for less than the actual infraction so I could use defensive driving to remove the charge. The third time I was pulled over because he thought my registration was past due (it was not) (if you’ve been following me for a while, this was the time the officer tested my tiny bags of flour for drugs). We laughed about the misunderstanding. No tickets. No aggression. The fourth time I was definitely speeding, but received a warning because I told her (honestly) that I was headed to the VA hospital to do therapy work with my dog and she was a veteran so she let it slide.

I was also stopped by police two times for “jaywalking” while in college.

One time was during a Texas Relays meetup in downtown Austin when the streets were literally packed with pedestrians. I was the only white person, and the only female, in our group. The officer ticketed my friends, pulled me aside, and asked if I was there “of my own volition.” Upon assuring him I was, he gave me a warning.

The second time was at the end of summer. I’m Italian. I was very tan. I was still the only white person there and I did get ticketed that time, except my race was recorded as Mexican and I was able to get it dismissed on that technicality. My friends, of course, had to pay theirs.

I’ve also been a passenger in cars that were stopped by police around a dozen times. Only one of those times the driver was white—incidentally, one of the few friendly encounters I’ve had with police as a passenger. The other times, I was asked by officers what my relationship was to the black or Latinx male drivers, asked to step out of the car and speak with them privately because they were concerned for my welfare, asked if the (nice) car my friend was driving was mine (before they even checked the registration), asked if my “father knew I was out with these boys” or “this boy” even when everyone in the car was well over the age of 18. In nearly all of these situations there was no ticket issued. We stayed calm. I tried to diffuse the situation, if possible, and everyone got home safe. But I was always painfully aware that had we not stayed calm, the outcome might have been very different, and I would not have been the one in danger.

I did an internship with the Austin Police Department in undergrad and was accepted to the police academy upon graduation. I seriously considered becoming a detective instead of going to grad school. I’ve been mentored by and am friends with several good, honest, incredibly hard working police officers/detectives/canine handlers of all races and genders and I have so much respect for the work they do every day.

But I am also very aware that my interactions with police from the time I was a teenager until now likely would not have been so positive were I not a white woman from an upper-middle-class family driving nice vehicles. I am also very aware that the negative experiences I’ve had with police (which ALL occurred because I was in the presence of non-white friends) cannot even begin to compare to the negative experiences that my non-white friends have been dealing with since they were children. This is not a “few bad apples” issue. It’s a deeply entrenched, systematic one that must be addressed on a wide scale.

Also, if I can add one more thing for anyone reading this thinking “but what can I do??”: I believe that, as a white person, recognizing that this is a problem is not enough. Medium published this article a few years back that I think is still a great outline for white folks who want to do something other than make sad face reactions on their POC friends’ facebook stories about injustice: https://medium.com/equality-includes-you/what-white-people-can-do-for-racial-justice-f2d18b0e0234.

Yeah, when we say ACAB, THIS IS FUCKING WHY.