The Parkland survivors, in their own words. For Our Lives: Parkland airs tonight on Freeform at 10|9c. 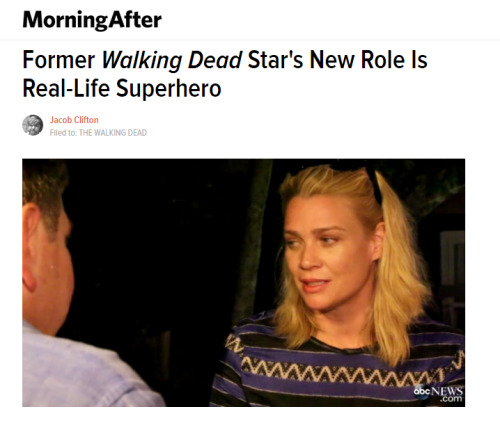 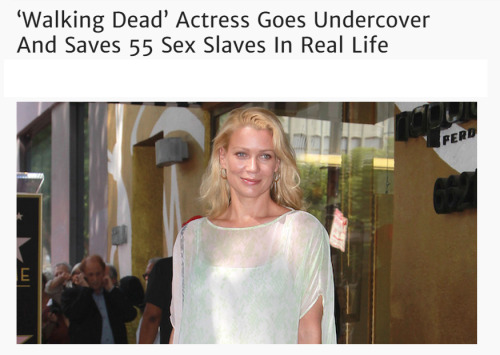 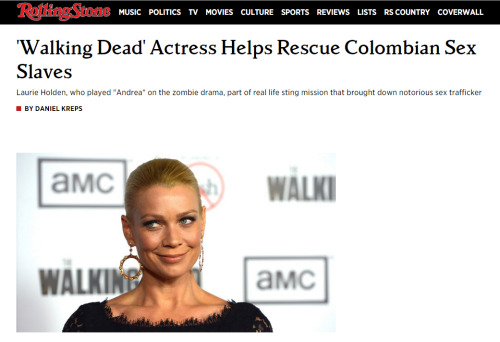 “Here’s a pretty unbelievable story: Laurie Holden is an actress who plays Andrea on “The Walking Dead,” but she isn’t just an actress. Holden also works as a human rights activist with a group called Operation Underground Railroad. It’s an organization run by an ex-CIA agent named Tim Ballard that works to take down unsavory human traffickers and the like. So, Holden and the group went down to Colombia to try to take down a group of men who were trafficking in underage prostitutes. Ballard, Holden and co. ingratiated themselves into this group and set up an elaborate party in an effort to catch these men in the act….” Adam Pliskin, Elite Daily

“For months, the group put together a massive sting operation in cooperation with Colombian authorities. They each had an elaborate cover story. Ballard’s story was that he was the best man in a wedding back in the U.S. and was looking to hire several underage prostitutes for a big bachelor party in Cartagena. The cover was meant to lure the sex traffickers into a setup so that Ballard and his team could rescue the girls, many of whom were under 18. … In order for Colombian officials to prosecute the sex traffickers, they have to catch them exchanging money for the girls on tape. … Holden’s job was to “keep [the traffickers] occupied by the pool area while Ballard and the undercover officers worked to catch the traffickers on tape exchanging money.” Candace Smith and Aristides Pinedo-Burns, ABC News

“When the traffickers agree on camera to to pimp out the underage girls and the money is exchanged, the cops move in to make the arrests.  During the ordeal Holden works with social workers to comfort the girls, who fear they’re the ones who will be in trouble and that they won’t be paid. Holden is clearly heartbroken when interviewed after the fact. But she should also be extremely proud of her work.” Ian Cervantes, Complex

brendon uriePanic! at the DiscobrendonuriepanicatthediscoPanic at the Disconightlinehb
1,848 notes
Loading...Show more notes
Reblog
abcnews.go.com
Video: Chelsea Manning explains why she leaked secret military documents
In an exclusive ABC News interview, Manning talks about why she risked her career to disclose the information and her fight for transgender rights while in military prison.
By ABC News

It’s an opportunity for them to have their stories told. I’m just using my platform to the best of my ability.

G: I’ve never done it. This is like the first time. But you’re gonna jump on my back, like a piggyback, and then I’m gonna spin, and when I say “Now” I’m gonna flip you into my arms and cradle you.
A: Have you tried this with anyone?
G: No, not yet.
A: Great.

Ryan White on Nightline, March of 1988. He died two years later from AIDS.

If the current administration was watching this right now, what would you want to say to them?

adam ripponnightlineyouththe young people of america are watching and are actingcivic engagementpoliticsmine
166 notes
Loading...Show more notes
Reblog
“Donald Trump is the literal opposite of Fred Rogers.”

I posted that earlier to my facebook feed, and I’ll be honest…  When I did it I was kind of hoping it would encourage my friend who studied the life of Fred Rogers extensively to chime in because I knew he would have something pertinent to say.  I was not wrong.

“Fred Rogers had such a huge problem with both Regan (who he programmed his show against) and Bush Jr. (The latter of which is much more complicated as they had a relationship that tested Fred’s boundaries.) that I can’t say “I can’t imagine how Fred would react” I know how Fred would react based on his interactions with the lesser evils of Reagan and Bush:

1. Had he not been retired, he would have themed weeks specifically against what Trump was putting in the news cycle. When Trump mocked a disabled reporter he’d have a week on disability and inclusion, when Trump promoted sexual assault, he’d program a week on respect and physical boundaries, when he bad mouthed women he’d have strong women on for a week. Fred would have travelled to do a week on Mexico and he would have moved in an Islamic neighbor.

I know this for a fact because these are the actions he took with Regan both with his “conflict weeks” and his traveling to Russia for remotes during the Cold War.

2. Fred would have attended events Trump invited him to but he would do so on his terms. He would participate in these events as well as long as it was on his terms. Because Fred would rather speak truth into those spaces then avoid them. But Fred would not accuse, he would just bear truth, refuse to be seen as supporting an evil and exit.

This is what he did to respond to the love the Bush family had for him and his work. He even offered prayer at one of their fundraisers: but it was a challenging prayer, one insisting that those in power and privilege use that for the least of these and especially children. After delivering that prayer Fred exited the building and sat outside like a kid after soccer practice waiting for his ride, spurning the thousands of dollars a plate dinner not even gladhanding with the bushes after.

When asked why he said he had reached the limit of what he could do before becoming an accuser. He wanted to challenge but never accuse as accusation was what Fred associated with the devil.

3. Fred would accept invitations to news programs when those programs allowed him to educate parents on countering the negative things coming from the president for their children. He knew those things affected children so he wanted to spread tools on helping them reject war, violence, hatred, oppression and racism.

He did this during any presidents term if it didn’t prevent him from meeting an obligation to children (he once turned down a spot on Nightline to talk about violence and children, one of his main causes, because he had a visit to an elementary school that same morning and knew he wouldn’t be mentally present for it if he was planning for Nightline in the afternoon.)

So we need to be like Fred. Getting in between children and any normalization of Trumps ways or words. Fred would have been diligently working on how to handle Trump in the land of make believe. Just like when King Friday started building nuclear bombs with money he promised to schools. Yeah Fred wasn’t subtle.” - Rev. Kevin Ireland 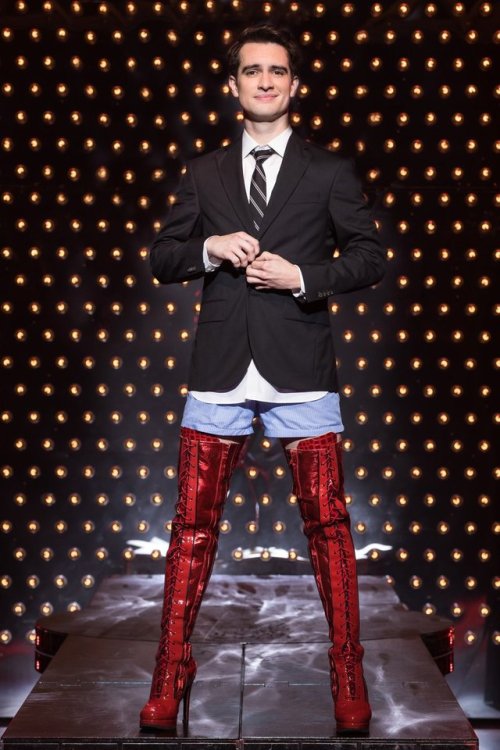 Channing TatumMatt BomerNightlineMagic Mike XXLLook how excited Matt is about it!He so wishes HE got a Care Bear too!And he knew its name and yelled CARE BEAR STARE!presspress: magic mike xxlminegiffavorite500 plus1000 plus1500 plus2000 plus2500 plus3000 plustalk show5000 plus
5,348 notes
Loading...Show more notes
Reblog