Because it has the notes A, C, E

C, E-flat and G walk into a bar. The bartender says, “Sorry, but we don’t serve minors.” So E-flat leaves, and C and G have an open fifth between them. After a few drinks, the fifth is diminished and G is out flat. F comes in and tries to augment the situation, but is not sharp enough.

D comes in and heads for the bathroom, saying, “Excuse me. I’ll just be a second.” Then A comes in, but the bartender is not convinced that this relative of C is not a minor. Then the bartender notices B-flat hiding at the end of the bar and says, “Get out! You’re the seventh minor I’ve found in this bar tonight.”

E-flat comes back the next night in a three-piece suit with nicely shined shoes. The bartender says, “You’re looking sharp tonight. Come on in, this could be a major development.” Sure enough, E-flat soon takes off his suit and everything else, and is au natural. Eventually, C, who had passed out in the bar the night before, begins to sober up and realizes in horror that he’s under a rest.

So, C goes to trial, is convicted of contributing to the diminution of a minor and sentenced to 10 years of DS without Coda at an up scale correctional facility. The conviction is overturned on appeal, however, and C is found innocent of any wrongdoing, even accidental, and that all accusations to the contrary are bassless.

The bartender decides, however, that since he’s only had tenor so patrons, the soprano out in the bathroom and everything has become alto much treble, he needs a rest and closes the bar.

(Taken from this link) 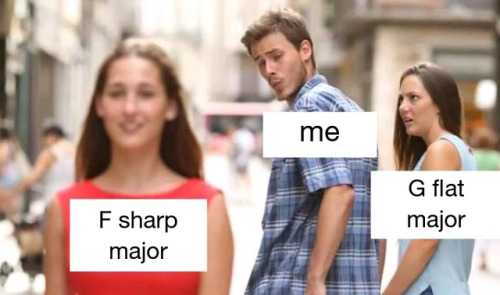 I screamed when I found this out 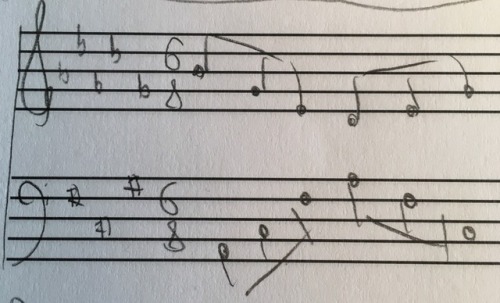 so I slammed my head on the keyboard yesterday and came up with thisno joke a and d flat major work really well togetherit's a fun little experimentmusicmusic theorypiano
177 notes
Loading...Show more notes
Reblog

Whether you think you’re sharp or falling flat, it’s all a natural part of life. Especially if your instrument is out of tune.

Things to tell your music teacher after failing to identify an E flat: please accept this D.

before anyone asks, yes both songs I’ve written for my dorian gray musical so far are in dorian mode 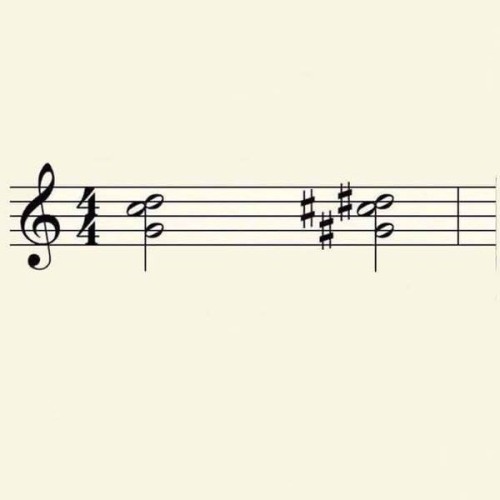 (Okay, so this post is going to reference a headcanon/theory that is not mine, and I’m not sure who created it, but I’d like to give them proper credit. If you know who came up with the theory that Jesse and Crutchie are the same person, could you please leave something in my inbox letting me know so I can credit them? Thank you!)

(I’m also on mobile while my laptop is being repaired so this probably looks crappy and I’m sorry.)

I know this sounds weird, but hear me out.

Pretty much everyone has heard the theory that Jesse Tuck and Crutchie Morris are the same person, and that’s mostly based on the fact that both characters are played by Andrew Keenan Bolger, even though the characters themselves are from different musicals.

The theory suggests that when the Tucks fled Treegap that Jesse went to New York and hid under the pseudonym of Crutchie and became a newsie. Now this is where multiple versions of this theory start. Some suggest that he became a newsie for fun (because we all know how Jesse just does stuff for the aesthetic), or that he had a reason for this. (One post suggested that his leg got run over and that the rest of the newsies took him in while his leg “healed” and he stayed with his new friends until it was time to go back to New Hampshire to marry Winnie.) These also make since because Jack and Winnie are cannonly the same age, so the year of the strike would be the year Jesse would go back to find her, only to find that she was with Hugo.

So my older sister and I are explaining this to my mom in the car earlier since we’re both super excited about Newsies being on Netflix today. Then my mom asked who AKB was and we told her what shows he was in, which led to us telling her about this headcanon/theory.

My older sister, Vannessa, says, “I think Jesse Tuck and Evan Hansen would be really good friends. They both like trees, so it would be fun to assume they both interned as park rangers at the same time.”

And my mother gives us the most serious look I’ve ever seen grace her face and says, “Their not friends. Jesse is Evan’s dad, obviously.”

Whoa, holdup. We had her explain why she thought that, and my momma delivered. She pulled out all the receipts. This was her explanation:

“Well, because Miles settled down and had kids, we can assume that at some point Jesse might do the same. Let’s assume that people knew about Jesse being immortal. If he was already Crutchie, he couldn’t go by that again, and maybe the friends he left behind in New York were looking for him. I think it’s safe to say that he would go by different names from time to time. Maybe one of those other identities had the last name Hansen, and he got married. Think about it, Evan and Jesse both have blonde hair and vaguely the same hairstyle. In the song Partner in Crime, Jesse says ‘if no one’s there to hear it, does a fallen tree make a sound?’, and in Waving Through a Window, Evan says, 'when you’re falling in a forrest and there’s nobody around, do you ever really crash or even make a sound?’ Evan would’ve inherited his fathers love for trees.

At that point Vanessa kindly points out that Evan’s dad left. My mom had answers for that.

"Maybe somebody was after him because they realized he wasn’t aging and the only way to keep Evan and his mom safe was to leave.”

But Evan’s dad left them for a cocktail waitress.

“I counter what I just said. What if the cocktail waitress was immortal and he realized that he could be with her without putting her in danger? Maybe she was a descendant of Winnie Foster and/or looked like her and that made him want to be with her.”

This is all I’ve been thinking about for the past few hours. It actually makes sense, but maybe that’s just me. Think about it.

If you B# then they’ll C you lookin natural

also known as a 64th sexual

Minor? What, like the third is lowered a half step and all of a sudden you own it? Why not ourser, you selfish prick?

I just read the novel Only Mostly Devastated, AND I SOBBED THE WHOLE WAY. Like, bruh. You can’t do this to me. Anyways, it was a quick read, 3 hours for me. For an advanced reader, 2.5 hrs, and for a not so fast reader like my sister, 4 months, 14 days. Anyways, I totally recommend it. “It’s like Grease but gay.” -My friend yestersay afternoon while handing me the book. If you’ve read Red, White, & Royal Blue, this book is PERFECTO. Just… yes… 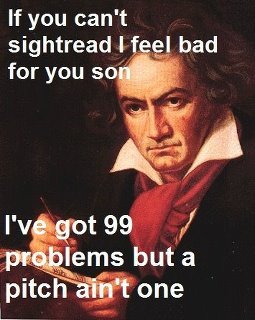 They call me diminished chord cuz I’m weak and unstable

i honestly do not know under which tag i should post thisin the light of recent tweets i'll tag this under the usualdreamwastakengeorgenotfoundplease help me if i have to study music theory for much longer i'm gonna be deafi am probably 23rd to make this joke but whatever
20 notes
Loading...Show more notes
Reblog