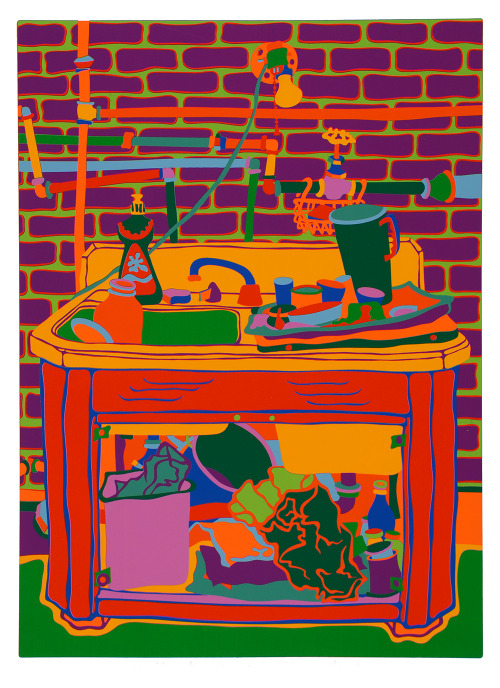 Clayton Pond, The Kitchen Sink in my Studio, 1972

a/n: finally giving writing an actual story a go so let me know what you think! not sure how many parts this’ll be but i’m excited for it! part 1 doesn’t include too much of shawn but i wanted to set the scene, you know? this was inspired by damn (what must a woman do) by christine the queens

Rays of sunlight peeked through the blinds and her eyelashes stuck to one another as she tried to open her eyes. Her legs felt the warmth of another pair, entangled with her own.

The room was muggy and dusty; the air remained stale and unmoving. A thin layer of sweat formed where their skin met. The comforter, now strewn on the floorboards, became a sweat rag more than anything else.

She shifted in the bed to face the body next to hers – Sarah – she deduced after running through her mental rolodex of the people she met in the club the night before.

Careful not to wake the sleeping figure beside her, she moved slowly and cautiously, prying Sarah’s legs off her own before gently laying them back down on the mattress. It lacked a bedsheet, she noticed.

The bed frame squeaked softly when she sat up, as if it, too, were aware of the presence of Sarah. Unfamiliar with her surroundings and with a head that was pounding relentlessly, she tried her hardest to search for her shoes, moving her feet around until it bumped into what could’ve either been a shoe or a cat.

With her brain feeling like it was bleeding, her jaws tight like she’d clenched them the entire night and her back aching in a way that extended from the top of her head down to the soles of her feet, she had no capacity to think straight.

Cat or shoe, she slipped into them.

She stood up and the room she was in seemed to spin and before she could get any dizzier, her hands reached for the nearest surface and grabbed it for support. Willing herself to get out of the unfamiliar home she was in as fast as possible, she grabbed whatever clothes that were strewn on the floor and threw them on her body, grey sweats that smelled like pizza and booze and a white t-shirt that she could’ve sworn had the lingering smell of cologne. She wondered how it managed to get there.

She headed towards – or more like stumbled towards – the kitchen sink of the studio apartment. Turning the knob and letting the cold water run through her fingers, she felt the sweat and grub of the previous night wash away. She cupped her hands to collect some water and dipped her face into it. She lifted her head back up and the split second of bliss was over as soon as it started and the air, still as stale as it was before, made evaporation of the water on her face seem impossible.

It was the height of summer and she had to get out of this oven-like apartment before heatstroke crept into her bones.

She grabbed her phone and her wallet that lay on the window ledge and headed to the door. She turned the doorknob slowly, as if turning it slowly would minimize the squeaking. She was wrong. The doorknob, in urgent need of some oiling, squeaked tirelessly but eventually, the apartment door pushed open.

Door. Lift. Door. And she was out.

Heat enveloped her, twisting and turning, longing for contact with every limb and every surface of her body. The sweat that lined her body made the loose white shirt sheer out and stick to her chest, exposing her in a way she’d usually be self-conscious about, but who was to talk about being conscious with her in such a semi-conscious state.

Tangled hair stuck onto her forehead and neck. She dug her hands into the pockets of the grey sweats hoping to find something she could put her hair up with.

Her fingers brushed against something that felt like an elastic. Bingo.

She used her fingers to brush her tangled hair into a ponytail so untidy that it couldn’t even pass as a messy ponytail.

A few taps on her phone screen using muscle memory and an uber was called to send her back to her apartment.

Soon, the temporary refuge in the backseat of an air-conditioned Honda civic came to end, as all good things do, and she was met with the unbearable heat yet again. It bounced off the hot tarmac road, creating an illusion of wavering images. She stepped onto the sidewalk and muttered a quick “thank you” to the driver before he sped off.

She trudged up the steps of her apartment complex and the sound of her keys jangling echoed through the hallway. The shower was destination number one.

Stripping out of clothes she wasn’t even sure were her own, she jumped into the flowing water of the shower and shut her eyes lightly, letting the water flow over her head and down her body. She stood under what she thought was her own personal waterfall with her mind swirling not with thoughts but with the calm that crisp, cold water brought along. This, she decided, was bliss.

Stepping out of the shower and patting her sun-bleached hair dry, she headed over to the kitchen counter, destination number 2. She plugged her phone into the charger next to the counter and let her now dead phone charge. She opened the fridge and surveyed the contents before pulling a carton of milk out. She grabbed the only cup she owned and poured out a generous glass of milk, before pouring in some breakfast cereal.

She remembered him saying once, as he sprawled out on the couch right in front of the kitchen, turning his head back just to look at her as she made herself some breakfast. She remembered the way he’d use her apartment as if it were his own; the way he’d spend hours on end on that couch with his guitar; the way he’d stay up all night with her while she was finishing up work but never stayed over, no matter how late it was.

It had been such a long time since she felt that slight beat of her heart that skips when thinking about him that she almost forgot that it existed; that it had once been a part of her life that couldn’t be avoided, no matter how hard she tried.

The buzz of her phone and her phone screen lighting up brought her back to reality from her haze of nostalgia.

Sarah (?) from the bar: Woke up to an empty bed, thought you mentioned pancakes last night?

She sighed heavily and started typing in her usual one-night-stand-morning-after reply. She was three words in before the ding of an incoming text message disrupted her. She paused for a moment and without looking at who sent them, she instinctively opened them.

havent seen you in ages

She looked at who sent the message and the name rung out in her head like it was echoing off the walls of an empty room.

Her heartbeat grew louder and louder as her heart hammered against her chest unremittingly.

A third ding snapped her back to reality.

Hesitantly, she looked down at her phone.