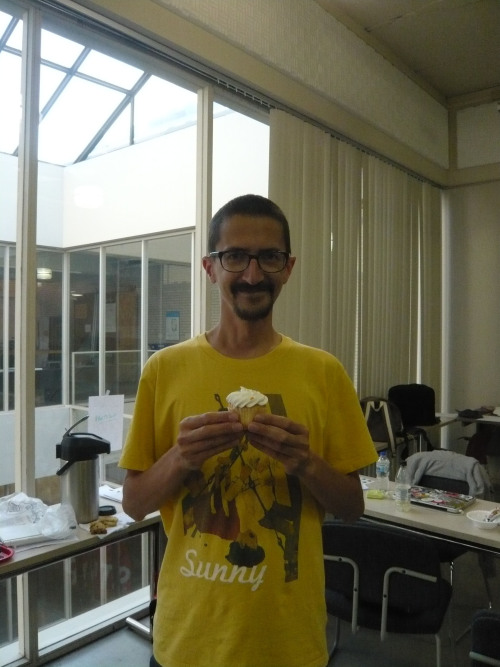 This is a picture of June, the creator of Pierre Feuille Ciseaux (Rock Paper Scissors), if you ever meet him in real life you’ll discover quickly that he is so sweet your heart will ache.  June’s project has already had three editions in France, but I had the opportunity to participate to the first installment on North American soil.

I still feel a bit rattled by the events which took place from August 10th to 18th 2013 in Minneapolis.  The entire time I would look around the room in disbelief at who was there, the fact that all of us were in this same studio classroom, with our favorite authors and our favorite drawing tools brought from home, was beyond surreal.  To add to the weirdness, we were live on camera, which we kept forgetting whenever a bunch of people would leave the room. Bringing a group of people who are introverts (for a living) together to work and experiment around a single table is no small feat.  As a sometimes festival organizer I could not even begin to imagine the sort of logistical planning which would go behind this type of puzzle: most of us flew on planes to get there, we were hosted in the dorms, we were fed, for one week.

Comics are nerdy.  I feel unapologetic about that.  While some folks feel cool telling the world they are big geeks I want to underline that comic book authors are a different breed.  This is lonely work and it doesn’t pay well.  This is nothing but a labor of love.  If you don’t like spending thousands of hours drawing the same thing over and over, you don’t get it. This occupation is extremely time consuming and the rewards are not always obvious.  I often feel like we share more in common with monks than with musicians.  While some cartoonists can be social and rowdy, most of the ones I was surrounded with last week were quiet.  I am not a people person, but I think I was probably the one who spoke the most the entire time.

Jaime Hernandez wrote on the internet that we were heroes for “destroying comics forever”.  What a crazy compliment.  I am not even sure that we did anything super innovative, I just feel like the single gathering of all these artists (outside of the usual comic convention context) was in itself groundbreaking.  I have described it many times as camp.  It was so much like camp.  There were lots of emotions in the air, we vented, we fawned over one another’s work, we expressed various insecurities.  A common theme was a cartoonist telling another cartoonist about how much they felt the other had their shit together “I am a mess! My life is a mess!” and the other cartoonist would reply “What? Me? I don’t have my shit together at all! I AM A MESS!”.  This type of back and forth got silly, but was absolutely necessary.  When you work alone all day long every day the monologues in your head get too loud and you lose touch with reality.  An outsider’s perspective is appreciated.

These cartoonists have each other’s back.  We are that much stronger for it.  I am home now, and trying to start my next project.  I feel like I was part of something special which may never happen again, something that will go down in history as the insane gathering of the best cartoonists of my generation.  Thank you so much everybody!