fucked up when gir said this in the show 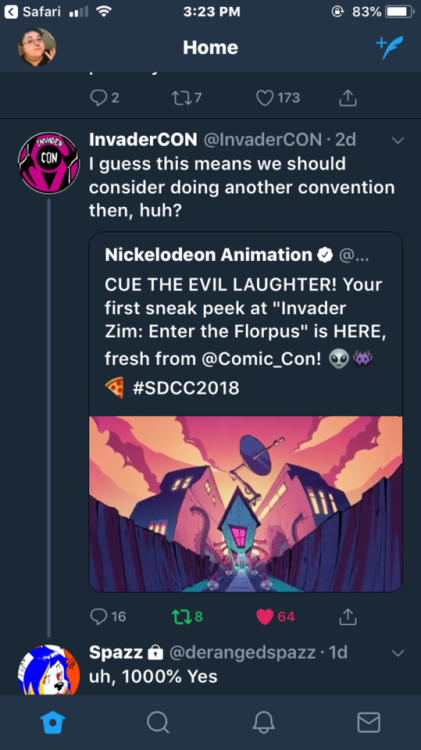 With Invadercon 4 on the horizon, I think we should get something out of the way:

(cept maybe richard he seems pretty cool with it lol).

DOESN’T MATTER WHAT SHIP IT IS OR WHAT YOUR QUESTION IS, JUST PLEASE, HAVE SOME COMMON SENSE.

Please let his con go better than the last two, guys. The cast/crew have done so much for us and we should treat them with the respect they deserve.

Tbh I want to go but I also have this image in my head of a complete shitstorm where people are begging Jhonen for unspeakable things and beating the crap out of one another over the zadr drama. Please don’t make my nightmare a reality. Please.

Psa: @invadercon is a FAKE account, confirmed by the official InvaderCon twitter. They continue to claim to be official. Do not follow them, do not interact with them. The people running the fake account obviously do not have good intentions, nor is it a parody account considering they continue to falsely claim official status.

This is extremely alarming considering that people have likely contacted this fake blog asking about times, dates, and have probably shared personal information under the impression that they were speaking to actual con staff.

If you have actual inquiries about the con, DO NOT ask any tumblr blog, no matter how official they seem or claim.

Report the blog if you have time. Thank you.

Okay, bad start. People are already worried about the possibility of The Almighty Jhonen reprimanding them. Also he didn’t get through the whole video but is apparently going to talk about it anyway because he feels the need to tell everyone just how big of an issue this is to him. So what’s the issue anyway?

“All you could hear during this episode were girls going ‘awwwww~”

Wait… you’re telling me we weren’t supposed to think the episode Mopiness of Doom was cute? This is news to me and I’m sure a lot of people in the audience felt the same. Also, fuck dude, maybe try not to make fun of the female fans for making their girly expressions of delight, alright? It’s demeaning.

“I knew this before but it really put a spotlight on how so many of the fans are watching the show wrong.”

I can’t even express properly how mad this remark makes me. It’s mind-bogglingly insulting and rude. To think that he was faced by all of these people who enjoyed something he created enough to organize an entire convention dedicated to it, and he had the nerve to criticize them for somehow watching the show wrong? Unbelievable.

It’s a fan convention, Jhonen. People are going to laugh, cry, and scream, and every one of those people are individuals who aren’t going to react to things the same way you do. It’s just a fact of life.

“It’s possible to watch a show wrong. They say that once you make something it’s no longer yours, it’s in the hands of whoever interprets it… Uh, also wrong.” [audience laughs but tbh I don’t know why]

Giant bad opinion alert but I believe that he’s actually wrong. Of course an artist has their original intent imbedded in their creation, and that will arguably never go away, but it’s fans that make art thrive because they all take away something slightly different from it. Fans aren’t just mindless consumers. They have imaginations and visions of their own. So really, you wouldn’t get any massively creative fan communities without people “watching the show wrong.”

“The major tenets of the show are sarcasm, cruelty, and violence.”

Okay king edgelord I think we knew that. I was scarred witnessing that cruelty as a kid, thanks. Now I’m older and I can appreciate all the awful stuff, but I can also think GIR is mega adorable and I can also ship ZaDr, and RaPr, and TaGr. Why? Because I enjoy doing so.

“Affection… warm-fuzzy things, anything that would inspire an ‘awww~’… It’s not in the show.”

Even if we pretended that were true it wouldn’t be true. I actually had to cut down the number of cute gifs I found because, let’s face it, this post is getting a little lengthy. I will mention Zim’s second adorable sidekick, Minimoose, since his entire speech in the Christmas episode was just “nyah!” It doesn’t get much cuter than that, folks.

“So when they’re responding to that in that way you know there’s something wrong with them.” [Jhonen points to his head and the audience laughs again]

The thing is that the girls weren’t saying “awww” at characters punching each other in the face. If I recall correctly Mopiness of Doom doesn’t even have much violence in it. They thought the episode was cute because it showed that Zim and Dib needed each other’s rivalry to stay sane. Zim became depressed and lazy without Dib antagonizing him, and Dib’s attempts to become a scientist like his father suddenly made his life feel meaningless. The episode ends with their glorious reunion as enemies and then they playfully take turns calling each other names.

I’m not surprised that ZaDr and ZaDf shippers like the episode so much at all and they definitely aren’t crazy like Mr. Vasqueeze would be so eager to suggest.

Maybe if he watched until the end of the video he would have seen this:

Invader ZIMmopiness of doomzadrzadfinvaderconmy rantslong post //i really dont know how this will be received but i had to express myself somehow
793 notes
Loading...Show more notes
Reblog
youtube

I’d just like to take a moment and remind everyone of the very first InvaderCON, which was held in Atlanta, Georgia in 2011

A video which I got to witness and was also watched by the voice actors of Zim, Dib, GIR, and Gaz

Richard Horvitz himself handed the prize over to the winner

invader ziminvaderconzadrvideosman i'm glad antis weren't a thing back thenthey probably would have lost their shit over this video winningbut hey man the IZ fandom knows how to partyi think this was the same convention where Dib's voice actor said 'i love you zim'might as well just rename it zadrcon with all the fanservice we gotninja edit: ACTUALLY I remembered Melissa didn't ask what ZaDR wasshe asked what YAOI wasbut yeah Richard basically said he'll show her laterthe crowd (and me) were losing it
609 notes
Loading...Show more notes
Reblog

That time the stage sagged at InvaderCon 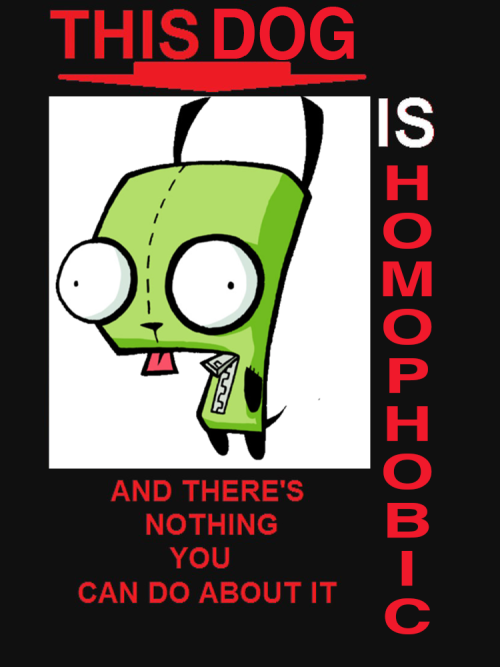 in light of recent events

The doom is coming once again!

In Rikki Simmons’s panel somebody asked what it’s like when Gir goes into red mode and Rikki said that that’s what happens when all the circuits line up and the SIR trapped inside of him gets out, and the SIR is Gir’s real personality, trapped inside underneath a wall of stupidity, and Gir can feel the SIR inside him trying to get out but unable to.

So basically Gir is very sad. Now you know! 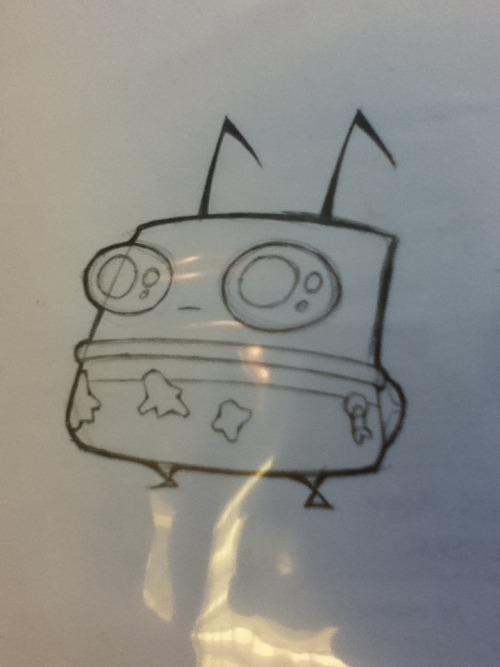 (btw this was from Aaron Alexovich’s booth in the vendor’s alley which I hope a lot of people got to check out!) 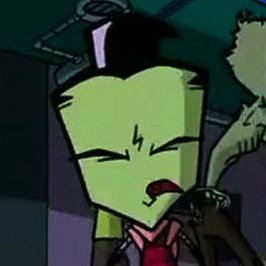 You razz on Rich, he’ll raspberry on you. During the live reading of “The Trial”, Richard Horvitz (voice of Zim) makes a lackluster sound effect and gets teased for it by the panel director. What follows is sweet, sweet revenge.

Mopiness of Doom really deserved to be a completed episode

Me: lol InvaderZIM is so 2008, I’m not even into that show anymore.

Me anytime I see or hear ZIM stuff: 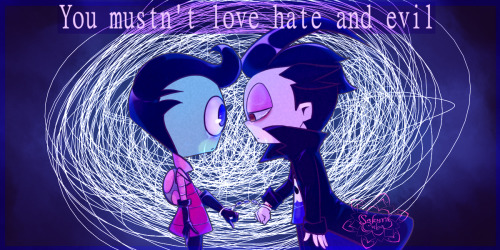 at first I couldn’t understand
Why are they paired?

THEY’RE ENEMIES
it was weird but now I like it 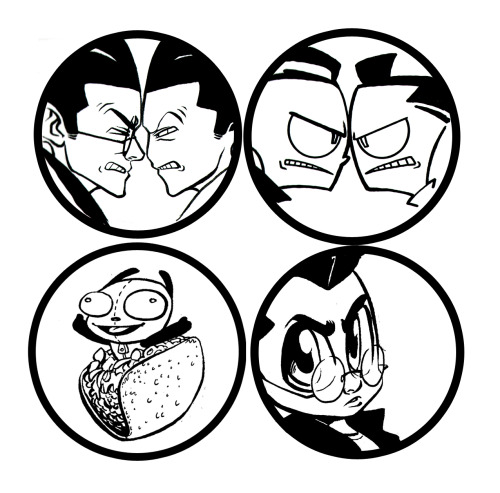 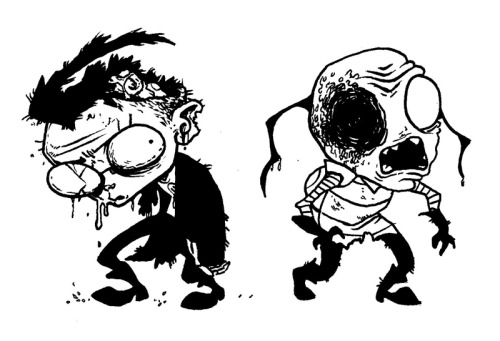 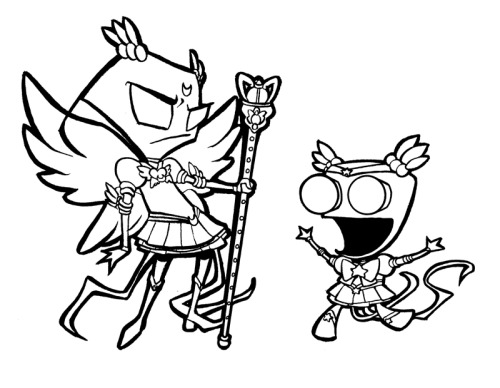 I was a vendor at Invadercon 2012. Some of these were featured, the top ones were button/keychain rejects.

The zombie Zim and Dib were airbrushed onto T-shirts, as was the Sailor Gir. Sailor Zim was going to be on a shirt, but the time and airbrushing didn’t pan out well.