in china they eat dogs

ok i already wasn’t stoked on the chainsmokers collaborating with bts but the fact that they have the nerve to make a joke about people in china eating dogs and then try to play it off as though they’re “raising awareness” is absolute bullshit. (full video here.)

how are you going to sit there and laugh about a controversial issue in an asian country when you’re about to benefit from exposure that an asian group is going to stir up for you??

not to mention, their careless joke spreads the notion that all chinese people eat dog when, in reality, the majority of the general population, as well as the government, don’t support the yulin festival and the initial protests against the festival were started within the local chinese population.

the stereotype of all asians eating dog has always been a harmful one and one that’s based in the idea that asian cultures are somehow “primitive” in comparison to western ideals.

laughing over a tasteless joke is bad enough but using it as an excuse to pretend they’re activists is worse. honestly these white boys can peace the fuck out and i hope bts pulls the song they collaborated on together  👋🏼

Trump will say anything. MAGA eats the dog food. 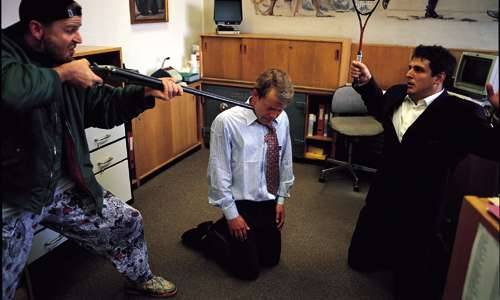 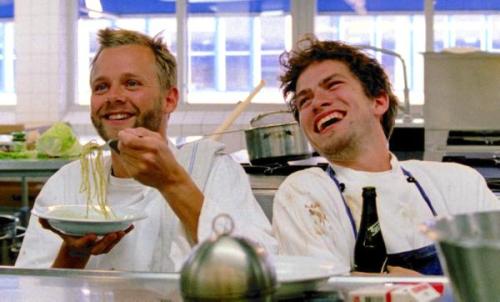 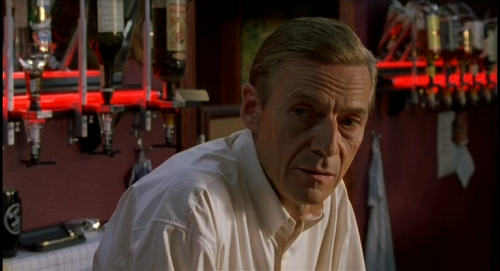 Arvid is a regular bank clerk, whose life changes radically when he knocks out the bank robber Franz with his squash racket. A few days later Franz’ wife visits him lamenting that she needed the swag for an IVF. To obtain the money Arvid and his criminal brother Harald plan a thievery, which ends bloodily and drags them into real trouble. (imdb) 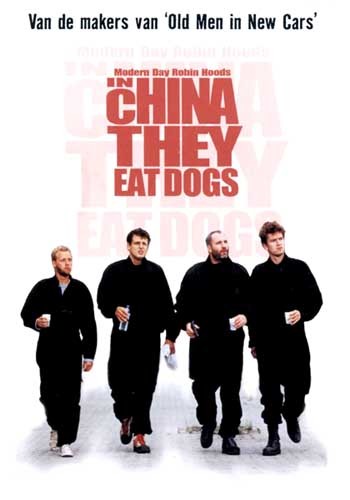 A Danish “Lock,Stock and Two Smoking Barrels”. Although this one is much more darker in its comedy and is surprisingly philosophical. 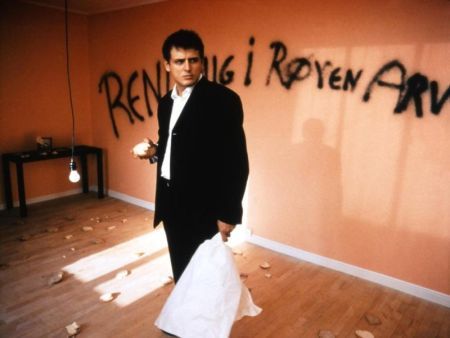 Dejan Cukic, 15 minutes before being arrested for vandalism.

Dejan CukicIn China They Eat Dogs
8 notes
Loading...Show more notes
Reblog
reuters.com
Shenzhen prepares ban on eating cats and dogs after outbreak
The southern Chinese technology hub of Shenzhen is moving to outlaw the consumption of dogs and cats as the country clamps down on the wildlife trade that scientists suspect led to the coronavirus outbreak.

The proposed regulations from the city government list nine meats that are permitted for consumption, including pork, chicken, beef and rabbit, as well as fish and seafood.

“Banning the consumption of wild animals is a common practice in developed countries and is a universal requirement of modern civilization,” the notice said.

Scientists suspect that the new virus passed to humans from animals. Some of the earliest infections were found in people who had exposure to a wildlife market in Hubei’s provincial capital Wuhan, where bats, snakes, civets and other animals were sold.

The document recognized dogs and cats’ status as pets and would ban their consumption. Snakes, turtles and frogs were excluded from the approved list, despite being popular dishes in China’s south.

“Although the trade in Shenzhen is fairly small compared with the rest of [Guangdong] province, Shenzhen is still a huge city and is larger than Wuhan, so this would be very significant and could even have a domino effect with other cities following.”

The other permitted meats are lamb, donkey, ducks, geese and pigeon. The proposal noted there are more than 2,000 species of protected wildlife in China.

Shenzhen’s proposal follows a decision by the central government on Monday for an immediate ban in the trade and consumption of wild animals, after an initial suspension in January.

The State Forestry and Grassland Administration is also moving to expand the scope of protected wildlife, and will revoke licenses for wildlife breeding organizations found to be breeding for consumption, Xinhua reported on Thursday.

The public will have until Thursday to respond to the draft, according to the document.

In Yulin, a city in the neighboring province of Guangxi famous for its dog meat festival, most dog slaughter operations have closed in the past two months because of restrictions on moving dogs across provincial borders, Li said.

You know how, in books and movies, there’s sometimes a scene where somebody says “Oh, so you’re from China? Eat a lot of dogs, then?”
And then they explain that far from all Chinese people eat dogs-

While it’s great that writers fight stereotypes, I do wish a book or movie would feature a Chinese person who does eat dogs now and then. And whose response is basically “Yes, I eat dogs, on occasion. And it’s no more barbarous or cruel than when you eat pork or beef.”

🤢 some people make me SICK

this girl keeps talkin bout burning chinaand shes so fucking racistshe says shit like china evil yall eat dogs 🤢🤢🤢🤢keep in mind shes a feminist and is all about gender equality ....keep the same mf energyshe also claims to be french and jumps people calling them frenchist 💀💀💀moving on
4 notes
Loading...Show more notes
Reblog
reuters.com
China's Shenzhen bans the eating of cats and dogs after coronavirus
The Chinese city of Shenzhen has banned the eating of dogs and cats as part of a wider clampdown on the wildlife trade since the emergence of the new coronavirus.
ushealthcoronaviruschinawildlife
4 notes
Loading...Show more notes
Reblog

I’m glad I’m banned from China cause sickos still eat cats and dogs for dinner there. 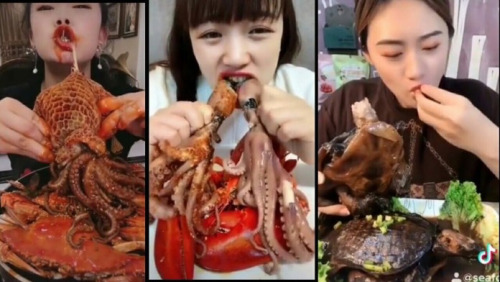 A post on my dash about food, China, the coronavirus and casual racism made me think about different “unusual” meats I’ve eaten.  It was a post on bogleech about some comments on some vegetarian site about a ban on wildlife-consumption in China for health-precaution reasons that veered into commentary about Chinese people eating dogs.

I think we’ve all eaten things that people in different parts of the world think is weird or disgusting.  I’ve heard that people outside America puzzle over the American love of cheese and bacon.  And of course, with bacon, a lot of us are eating a religiously-unclean animal for some cultures (and people within our own culture).

I’m a big fan of the late Anthony Bourdain’s shows and Andrew Zimmern’s shows and just find the cultural food exploration they do neat.  They’re the ones who ultimately got me brave enough to try sushi when I’d never had before and for that I am ETERNALLY GRATEFUL.  (I love the stuff!)  Like most white-ass Americans of my generation (I’m currently 40) I was raised to think “raw fish = ew” and I was wrong…oh, so wrong.  Raw on rice is now my preferred way of consuming salmon.  It’s not unusual in current American culture and I think people forget how weird it was for people of my generation.  (And it’s still a love it or hate it thing for most people who try it).

I grew up with hunter-uncles, though, and have had a few “odd” things.  Let’s see… what’s a bit “odd” to the standard American diet that I’ve had?

1. Eel - I’ve had this as an extension of exploring the world of sushi.  It’s not that unusual, but, again, one of those love or hate things.  A nephew’s had it grilled Japanese-style and hated it.  I’ve tried it as cooked sushi with sweet sauce and love it.  I haven’t had it any other way thus far - I ought to try British eel pie or a Spanish or Italian dish with it some way.

2. Octopus - again, sushi-plate.  I’d be afraid to try to prep, though, as I figure you have to do things to it to get it not-tough.

3. Wild crayfish - Caught in a lake by yours truly, that one time my uncle and aunt got a whole bunch from some southern-food shipper, and they’ve served them at this Chinese buffet restaurant I go to.  Not nearly as good as crab, but pretty decent, almost like a big shrimp.

4. Sunfish / bluegill / rock bass - Not all that unusual, but something people who don’t have a fishing-hobby have probably not tried.  Not sold in stores, at least not that I know. You catch ‘em and you clean and cook ‘em up yourself.  Rock bass are distinguished from bluegill (though they’re about the same size) but dark coloration and bright red eyes and I find they taste better.  Bony as all get-out, so if you just gut and fry them, be prepared to eat around the bones.  Even when I filet them carefully and pick out bones with tweezers / a hemostat, I still get some hair-bones.  They’re mild and quite good simply fried with cornmeal or fileted and sauteed with olive oil and garlic.  I consider them a summer treat.  (Easily killed by Ike Jime method or ice water bath - they’re warm water fish and are one of those that ice water actually kills quickly).

5. Venison. Haven’t had it in over a decade, though.  I remember my grandmother making a wonderful venison stew when I was a kid.  My last encounter with it was unfortunate, however…roast from a very gamey animal that an aunt of mine improperly shot with a powder-rifle she wasn’t practiced with.  She and my uncle had to trail it.  It was an elderly animal and I don’t know if the nastiness of the meat was from its age or the fact that the poor thing suffered for a while before my uncle could find it and give it a coup de grace.

6. Elk.  Again, hunter-family.  Haven’t had it in over a decade and I am sad because ELK IS AWESOME!  Elk-steak is like a good, lean grass-fed beef as I recall.  Wonderful, just wonderful.

7. Bear.  A couple of my uncles felled a couple of black bears.  I only got one barbeque bear-nugget. At the time, I was thinking “like beef,” but if I’d gotten a whole chop, I probably would have thought “like pork.”  It was just…meat.  Pretty good, for what I had.  I’d like to have a proper chop of bear someday.

8. Wild dove.  This time, courtesy a hunter-friend at a church pot-luck who’d shot a bunch of them on a bright Arizona morning before church during white-wing dove season.  Like good dark meat turkey.

9. Wild turkey, for that matter - my uncle got one one year (I think with his bow-hunting, like with the elk). The adults got to have a little bit of the bird at our big-clan redneck family clan jamboree.  (God, I miss those big clan holidays I had as a kid).  I’d came of age and was given the right to have a slice of the wild turkey along with the three or four domestic ones we’d roasted and smoked for the family.  I am sad that I never trained as a hunter, because if I ever take up hunting, it will be for wild turkey.  The taste of that thing…domestic does not compare!  Just… so, so good.  It’s like eating all dark meat, though, so you have to like dark meat as much as I do.  Rich flavor, just amazing.


I need to add things to my meat-list.  Really… it is kind of pitiful.