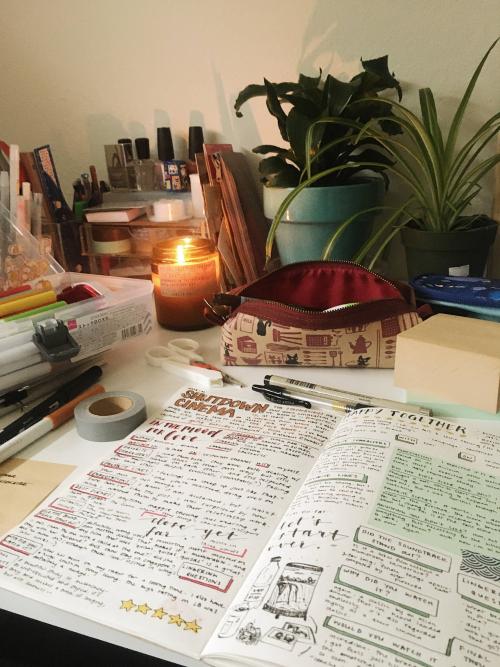 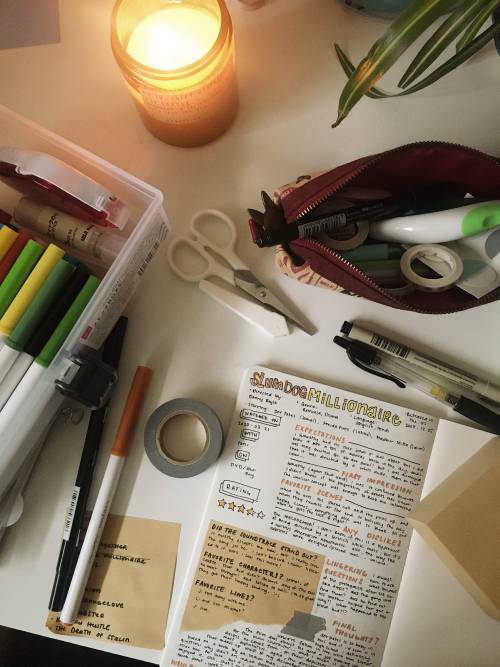 last night i started logging film reviews of everything i’ve been watching during the quarantine, using the review template drawn up by @athenus~ it’s been a very fun and therapeutic exercise so far. i was having a rough day and it actually helped my mood a lot. a little daunting that i still have over ten films to get through, but it’s quite enjoyable and i recommend it!

i’m using a little muji notebook i got while hanging out with one of my good friends in february. we both bought the same one with the intention of using it to write about “people, places, and things” and called it a noun journal. i’ve been using it to record excursions with my friends and as a place to save the receipts and tags and other scraps of paper i tend to accumulate… now that we’re all staying inside i’m having to repurpose it a bit.

anywho, thank god it’s friday. even though i’m working at home, i still welcome the weekend the same as i always have.

[ guard ] for your muse to step between my muse and danger

It’d been meant as nothing more than a SIMPLE observational excursion. Record a bit of data, grab a few samples & be back in the Seireitei before sundown. She had ASSURED her captain that no escort or further assistance would be necessary. After all, Rukongai’s streets were FAMILIAR & she’d longed for something other than desk work. Even in her current condition, Chiyo was positive such an assignment would be an EASY enough task.

How WRONG she would end up being.

While the defense unit had promised any remnants of DANGER had been cleared out, it quickly became clear that was NOT the case. Chiyo had made her way into the wood── familiar & WELCOMING as ever, with all the materials necessary for her mission. Yet nothing could have prepared her when a loud, DEAFENING screech tore through the terrain.

Quickly, small hands clamp over her ears, the sound WRACKING her form & bringing her down to her knees. Under normal circumstances, such a scenario wouldn’t elicit this sort of response── but a ROARING headache from prior in the day & a week’s worth of exhaustion had resulted in heightened sensitivity.

Her body’s INSTINCT is to screw her eyes shut. To curl in on herself & wait for it to pass. But she knows she needs to MOVE. She knows there is more than JUST her life on the line here. But as the shinigami goes to rise from her spot, the pack resting upon her back is CAUGHT, weighing her down & pinning her to forest’s floor with an unforgiving claw. Icy optics shoot upward, meeting the massive BEAST & it’s empty gaze.

The opposite paw makes a SWIPE, claws easily tearing through flesh on her chest & left arm. The pain is SEARING & all consuming. She knows she HAS to get out of this. But as she makes a grab for her zanpakuto, the absence of it in the folds of her obi becomes horrifically apparent. Chiyo’s line of sight is quick to shift, noting the blade a FAIR distance away ── Mostly likely having been knocked out of her belt when the creature attacked.

It’s then that the hollow seems to FREEZE. Advances completely halted, the brunette watches as it seems to begin to DISINTEGRATE right before her eyes. Now freed from it’s grasp, Chiyo shoots up, eyes now met with the familiar visage of her friend.

The Hougyoku’s expression is one of FRUSTRATION & Chiyo soon begins to feel as though she’s in for quite the scolding. That notion doesn’t change the RELIEF that washes over her. Rising from her place on the ground, she slowly makes her way over to him.

❝Hougyoku-sama… How did you──❞ Lips are quick to press into a flat line. This was a silly question. He ALWAYS knew. Her head hangs in embarrassment, before she speaks again, ❝I… I thought I would be FINE on my own. I SHOULD have been fine on my own…❞

sphaeraado not hit at all if it can be avoided ; ( ic )unashamed to think it; unashamed to say it ; ( inquiry)this got..... so long.......I am so sorry Rach lmaothis piece of writing is chiyo realizing field work is no place for a pregnant womanlmao
3 notes
Loading...Show more notes
Reblog