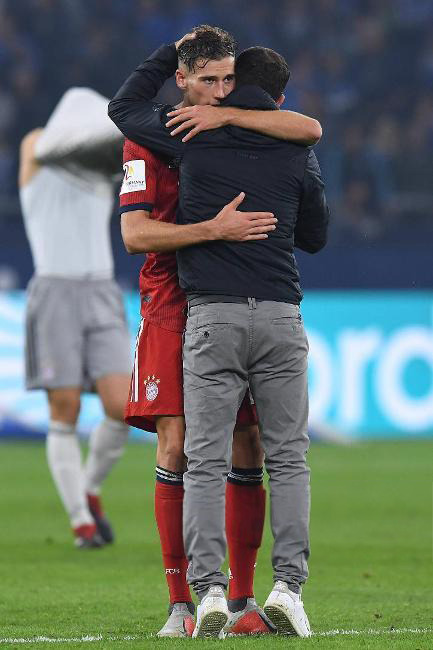 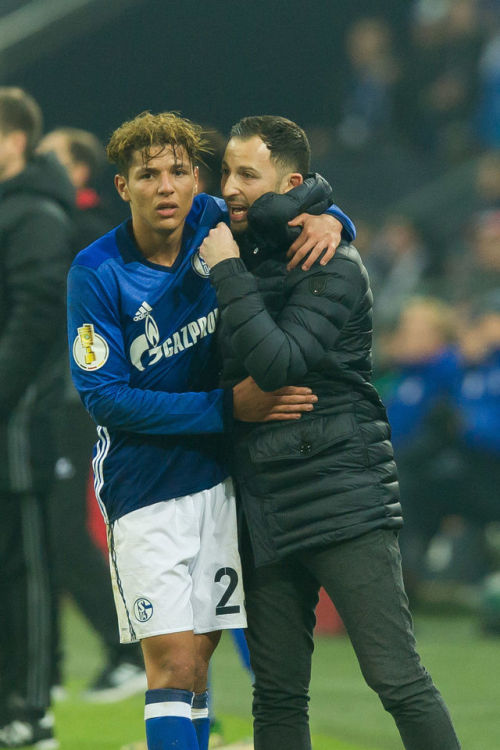 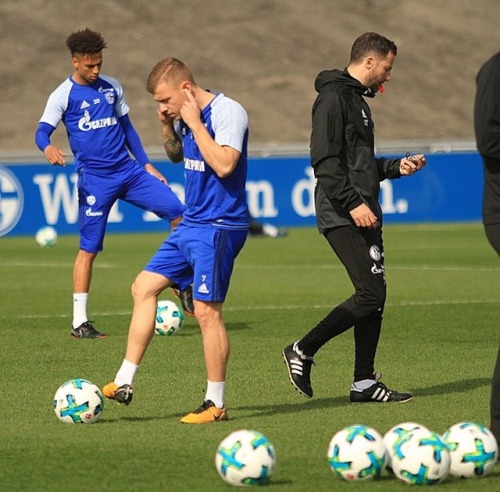 Domenico Tedesco has been relieved of his duties with immediate effect.

Huub Stevens and Mike Büskens will take charge of the team against RB Leipzig. 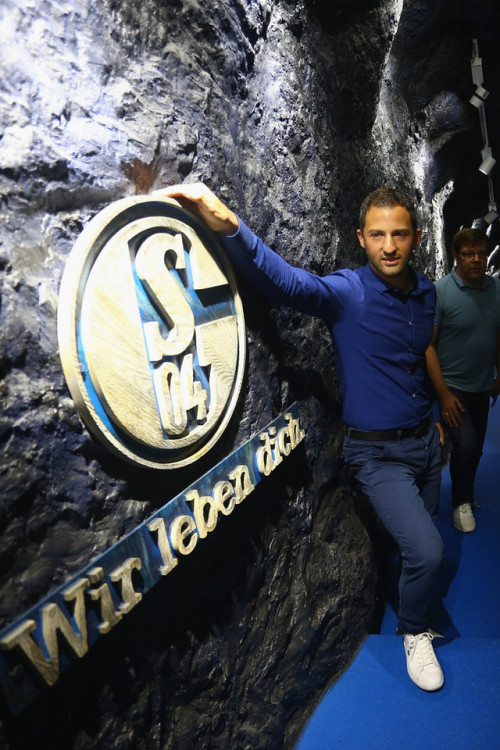 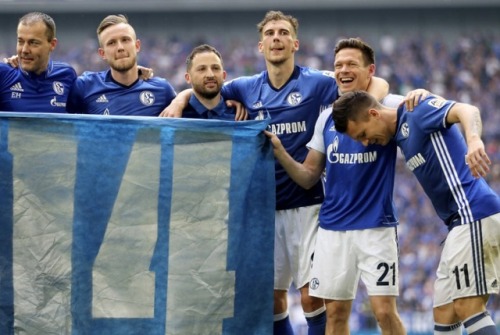 May 12: FC Schalke 04 vs Eintracht Frankfurt 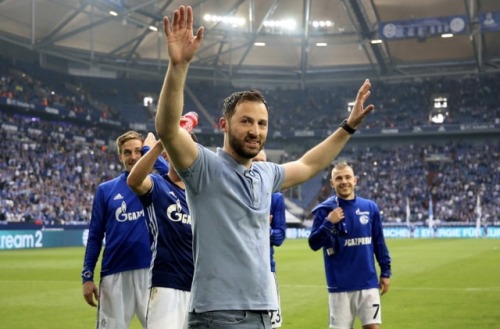 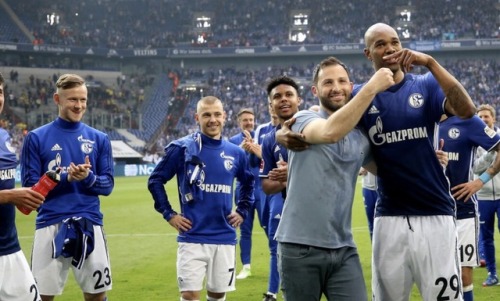 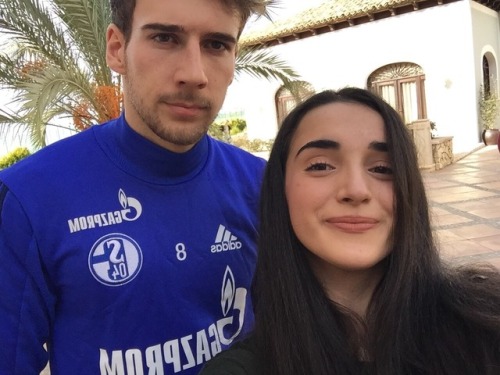 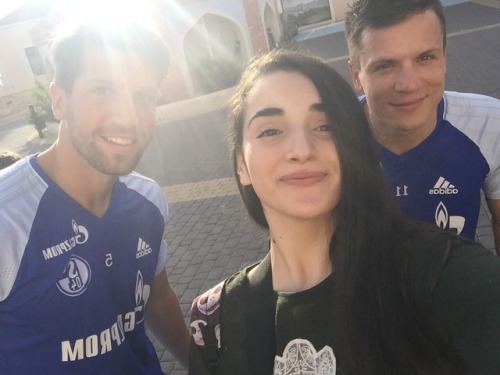 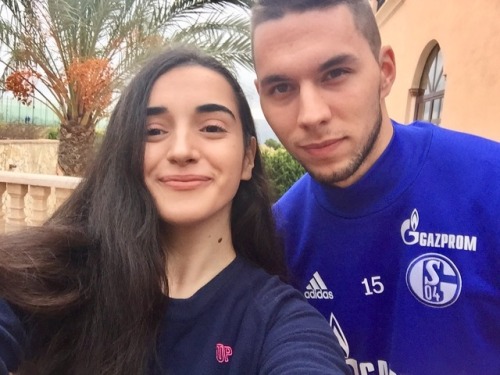 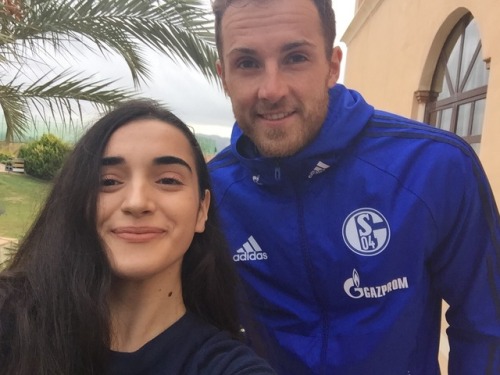 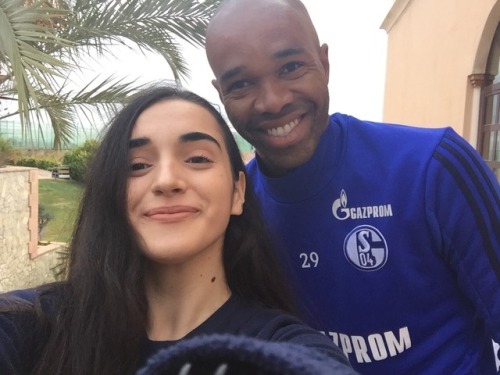 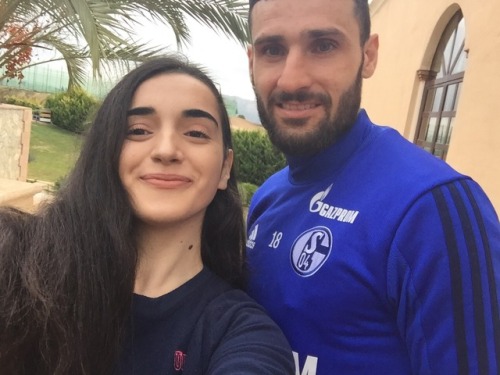 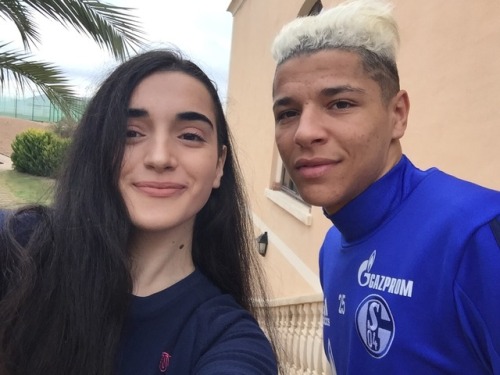 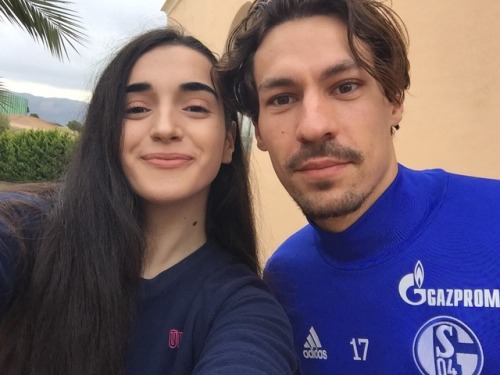 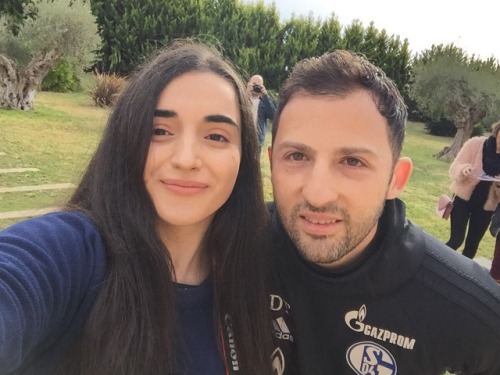 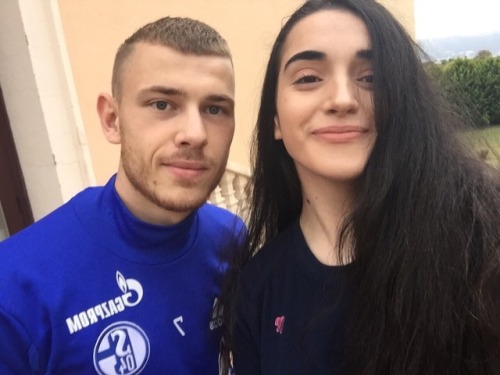 Throwback to when I met Schalke💙

The Coach is in Love - Domenico Tedesco Imagine (Chapter 1 - LAPS)

This fic was requested by @love-schalke1904 . I’m sorry it took long to finished. Chapter 2 is halfway there.

Also I would like to thank @quack-and-yellow for giving me a lot of ideas and beta-ing my work. I owe you. Just wait.

I just hope you will enjoy this fic guys.

The Coach Is In Love – Domenico Tedesco Imagine

It felt that time has stopped for Domenico Tedesco, Head Coach of FC Schalke 04. But if you ask why, it is because something…or rather someone caught his eye.

She was wearing Schalke’s gear for medics and was walking with the rest of the medical team towards them as he observes.

“Uhm coach?” Ralf snaps his finger in front of his manager bringing him back to reality.

“Where were we?” Coach Dom asked Ralf.

“The plan?” Ralf replied tilting his head to the side.

“Oh. Sorry about that, anyway…”

“Coach Dom. Sorry to interrupt but I would like to introduce someone to you.” One of the medics butted in earning sighs and whines from the squad for another moment of delay happening.

“This is (Y/FULL/N). She is the new team doctor who will be working with us.”

(Y/FIRST/N) lifted her arms to give a handshake to the coach. “It’s nice to finally meet you sir. Looking forward to help the team in the extent of my abilities.”

“Th-th-the p-p-p-pleasure is mine. Hahaha.” The coach replied as he reciprocate the gesture of shaking her hand, even too much.

“Is the coach okay?” Schöpf whispered asking Leon by his side.

Coach Dom still holds the hand of the new medic and it’s getting awkward around all of them.

“Uhm. Coach, I think you should go back to your team discussion.” (Y/N) said.

“Oh. Yeah.” The coach said when he realized he’s been holding her hand for too long and lets it go.

“I will watch by the bench. Just call for me if you need something.”

The team training went as smoothly as usual. But what was not running smoothly is that Coach Dom spends most of his time that time staring at a certain person by the bench.

“COACH! LOOK OUT!” Max shouts but it was too late.

Domenico turn his face to where Max was but what he saw was the ball swiftly coming to him and it hit his face and he fell on his butt. His players stopped, gasped and rushed towards him and so as the new team doctor.

“Dios Mio! Coach I’m so sorry.” Franco worriedly apologized sitting down to check his coach on the ground.

Domenico felt the world is turning so fast and he’s seeing flying things in front of him until he saw the silhouette of a person looking closer to him.

“It’s me, (Y/N). The new team doctor. Hang in there okay.” The doctor assured and held his hand and he reciprocates by holding it firmly.

The rest of the medical team came with a spine board and transferred the injured coach on it to the infirmary of the training grounds.

Domenico opened his eyes and was surprised to look on a ceiling. He rose himself up in bed and realized he was not in the field anymore.

“Oh, you’re awake.” (Y/N) said coming closer to the coach to check him. “How are you feeling now?” she asked.

“Still a bit dizzy. What happened?” the coach asked.

“You got hit by the ball in training. In the face.”

Domenico noticed then the pain on his nose and forehead putting his hand gently on the area.

“Don’t worry, your nose is not broken and you just have a slight concussion.” The doctor said while holding the coach’s chin to look for abnormalities. “You seem hot coach.” The doctor commented.

Little did she know that it was because of her. Domenico started blushing. Even with his scruff it is noticeable.

They were staring at each other for a long time, until Leon comes in surprising them both.

“Uhm, excuse me doc, can I have myself checked up?” the tall curly haired midfielder asked.

Leon went inside the room and showed his trademark smile at her, “No need for formalities doc, you can just call me Leon.”

Meanwhile, Domenico rose up the bed and looked for his shoes and wears them.

“I think I’m okay now doc. Thanks for everything.” He hurriedly said until he was held in the hand by (Y/N), making him stop in his tracks.

“If you felt something, uncomfortable or unbearable, don’t hesitate to go back to me, okay?” (Y/N) said and the coach nodded.

And again it seems that time has stopped between them, until Leon (again) spoke.

“Oh. Yeah.” The doctor said snapping out of her spacing while the coach goes out of the room but when he looked back, it somewhat pisses him that Leon was not just holding the doctor’s hands towards where it is painful but also caressing it.

The next day he made Leon run an extra five laps because he was somewhat mad at him.

The training days for the next matchday was a bit chaotic overly saying. The coach is sometimes out of his mind and instead of focusing more on his players, he seems to be looking somewhere else far. The worst things is that he made poor jolly innocent Thilo run ten laps on the training pitch and made him clean the pitch of all the cones, goal nets and balls that were scattered around. Ralf, being the captain and next in command after the coach was worried and asked the kid.

“Thilo, can I talk to you for a sec?” and the kid, already wide eyed, pouting in desperation and sadness was more down. “Don’t worry, I won’t take long.”

“Did you do something that made the coach pissed like that?” the captain asked and the kid just shook his head. “Are you sure?”

“I promise Ralle, I didn’t do anything. But I heard him yell at me during lunchtime when I accidentally bumped into Doctor (Y/N) spilling her coffee in her uniform. I apologized to her and she said its fine.” Thilo defended as if pleading to spare his life and the captain nods his head.

“Okay. You can go now Thilo. I know you still have plans to catch up with Max.”

And Ralf Fährmann seemed to know what to do.

CaptainRalle.1: Guys, be early tomorrow. We have an emergency meeting. Locker rooms.

Leon’s_Meyer: What?! Why?! I was planning to oversleep tonight though!

CaptainRalle.1: Oh stop complaining Meyer. We all know you and Leon have plans tonight.

Maxi’s_Goretzka: HOW THE HELL DID YOU KNOW ABOUT THAT?!

Captain_Ralle.1: You’re not as subtle as you think. Someone told me.

Leon’s_Meyer: Benni was pestering me to spill something because he felt something bad happening all the way from Turin!

Maxi’s_Goretzka: You’ve shouldn’t have told him anything Max! Argh!

CaptainRalle.1: Okay Leon. Stop. Settle it outside this chat. And everybody, please. Be early. Alles klar?

AlexNübelFussballgott: In behalf of the remaining players who loves to seenzone this chat, YES!

I’ll be posting the next part very sooner. It’s almost there.

I shouldn’t feel so sad for teddy being fired bc it‘s schalke and it‘s what I‘ve expected but I‘m actually really miserable rn bc he loved this club and I loved him. Thank you for everything you‘ve done for us. Thanks for two fucking great derbys, thanks for finishing second last season, thanks for reaching the cl last sixteen. Thanks for the love and work you put into this club. You‘ll be missed 💙 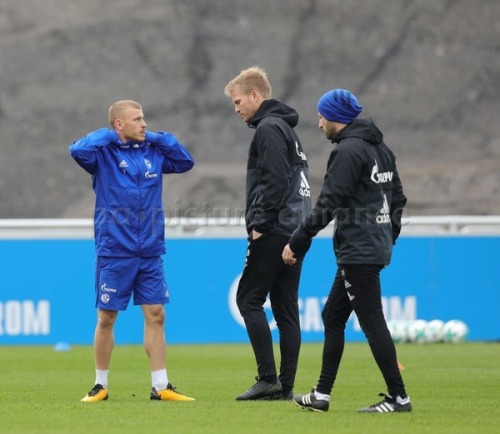 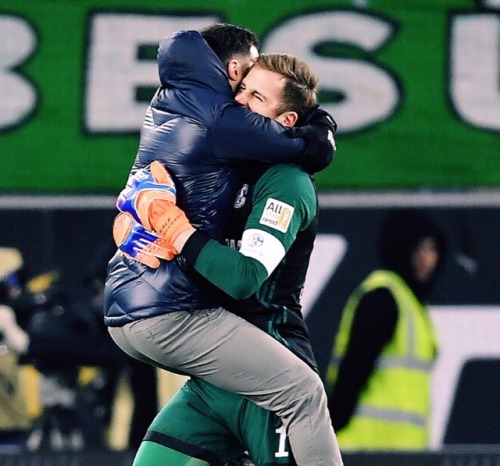 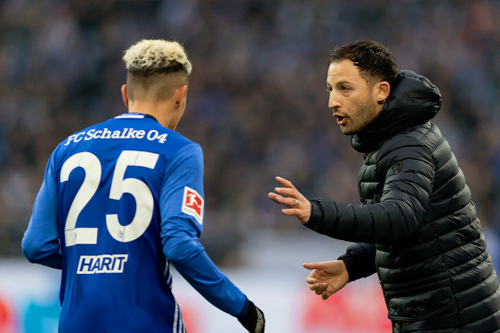 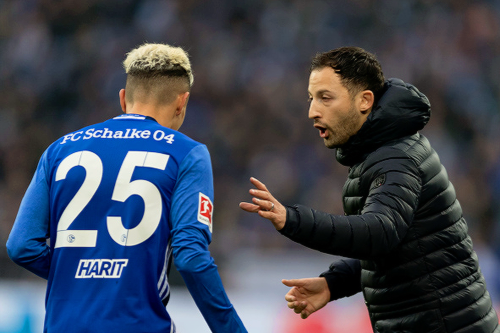 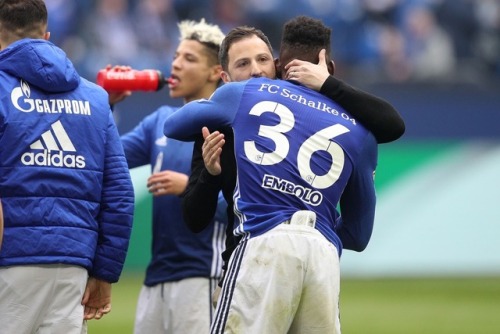