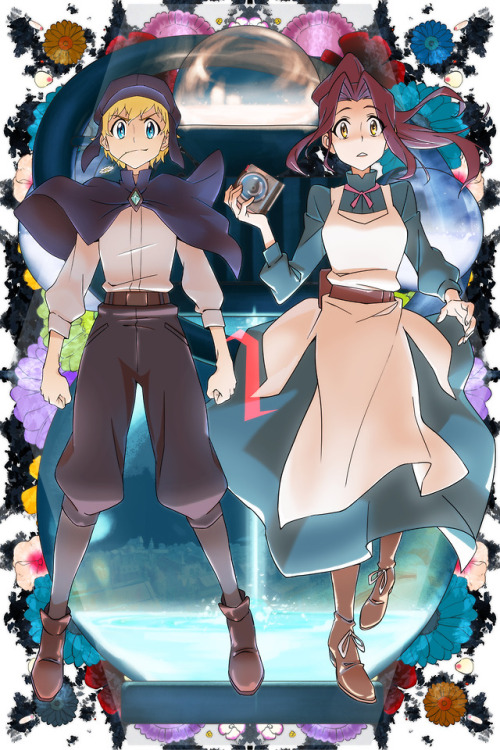 i saw you on twitter talking about klance holding hands in the poster and i wanna be hopeful but im pessimistic because maybe we're all reaching?? idk

I feel like I’ve spoken about this before, but basically, Keith and Lance’s whole position only makes sense if they’re holding hands, tbh.

Take a look at their legs - Keith and Lance are actually probably standing right next to each other but Keith is ahead in his stride, so Keith’s arm is back because they’re holding hands. Like how couples walk.

Keith’s arm is extended in such a way that if you flip it, it can only be them holding hands.

If the drawing isn’t enough with the help of stock image people, here is what Keith and Lance would look like if the shot was front facing.

See how they’re walking together but the white pants dude’s hand is slightly behind him? Okay, now here’s another couple also holding hands and walking but from the side.

And before anyone tries to pull Allura into this, first off it’s very clear Lance isn’t looking at her, he’s looking at the audience. If he was looking at Allura his eyes would be at the far corner of his eyes like it is with Hunk and Pidge in the poster.

Second, not only is Lance not looking at Allura, based on how the poster is cut and how Allura is looking back, she’s also probably looking at Lotor. The two of them are with their actual endgames, not each other.

To add to that, Allura’s helmet is very conveniently placed right where Lance’s elbow or hand could peak out, which would show it holding Keith’s hand. Allura isn’t in her paladin armor either, so her having her helmet in her hand doesn’t make any sense. The reason she’s holding it is a classic example of hiding something organically. TV shows use this trick A LOT when actresses are pregnant and they want to hide their baby bumps.

Lastly, it’s funny because if you look at Veronica and Acxa, they’re in a similar position to Lance and Keith and aren’t holding hands. Remember, Christie Tseng designed these posters like I Spy books so you get hints about the show via different characters and within the poster itself.

Having Lance’s sister and Keith’s female Galra pal stand very similar to Keith and Lance and NOT hold hands is a pretty good clue.

Anyway! So yeah, Keith and Lance are definitely holding hands in this poster because at the end of the series they are going to end up together romantically. It’s going to be a twist, but we’ve been knew! 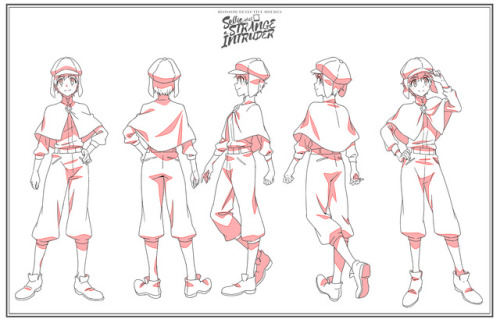 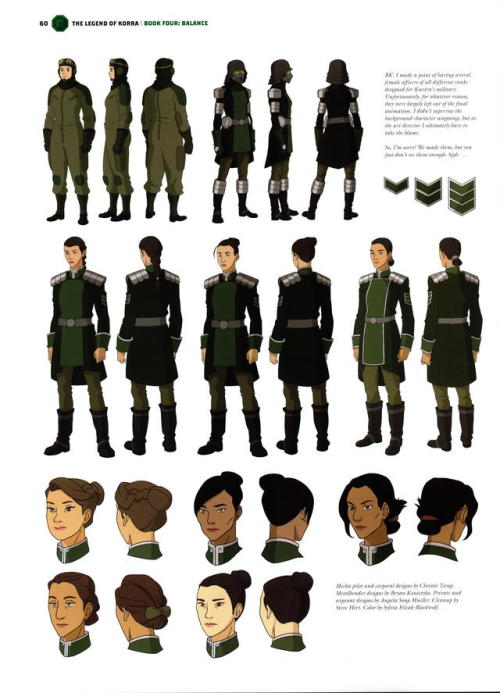 Bryan Konietzko: I made a point of having several female officers of all different ranks designed for Kuvira’s military. Unfortunately, for whatever reason, they were largely left out of the final animation. I didn’t supervise the background character assigning, but as the art director I ultimately have to take the blame.

So, I’m sorry! We made them, but you just don’t see them enough. Sigh … 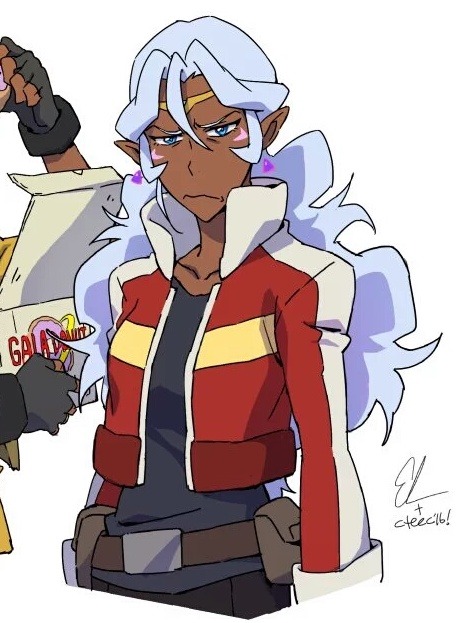 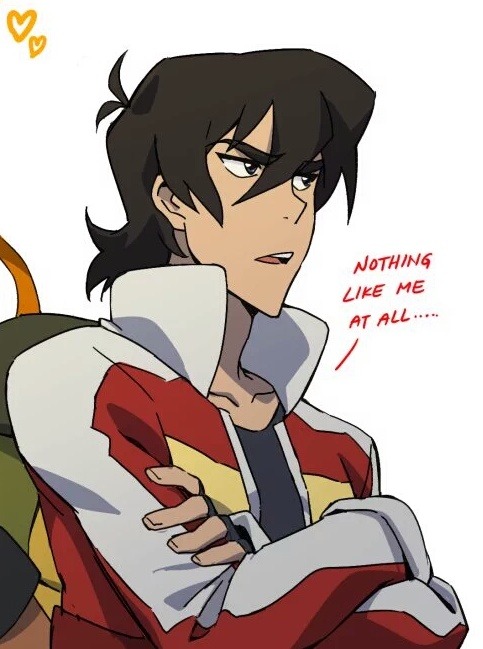 the day i forget about this is the day i die 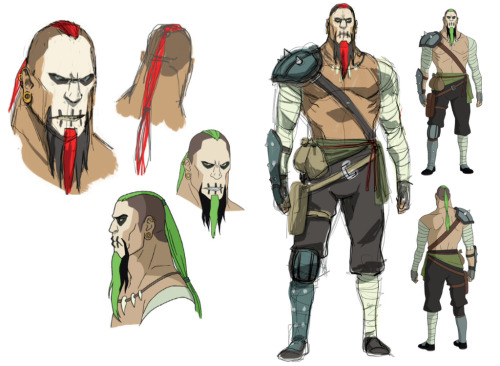 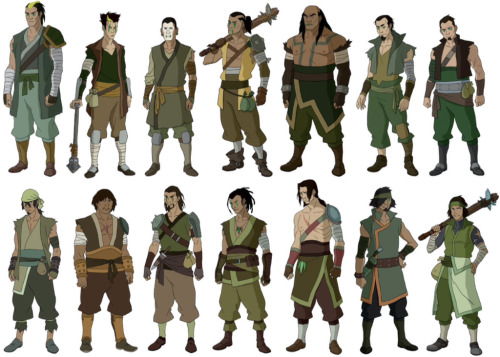 JDS: I sometimes have the fun and easy job of coming up with concept art and then leaving the hard work of making sense of my scribbles to people far more talented than I. Gombo here is the perfect example of that. Bryan knew of my love for all things Mad Max and asked if I’d be interested in coming up with an idea for the leader of this gang. The sketch you see here was done on my iPad, and Christie Tseng did all the legwork of making him real, as well as designing the rest of the gang members. I am always amazed at how much personality she is able to add to each model.

MD: Writer Tim Hedrick takes every opportunity to try to work barbarians into his scripts. What I like about these particular barbarians is that even though they are a gang of rabble-rousers, they are just looking out for the common man and don’t believe the queen is doing what is best for her citizens.

BK: My original concept sketch in the startup meeting for this episode was some sort of hammerhead-shark monster. Shortly thereafter, I learned about the bizarre sarcastic fringehead fish and its multicolored, tent-like mouth. I quickly changed course with the art direction of this creature, and Christine and Christie wonderfully brought it and its nightmarish maw into the Avatarverse. Sand shark by Christie Tseng, Mouth details by Christine Bian. Cleanup by Steve Hirt. Color by Sylvia Filcak-Blackwolf. 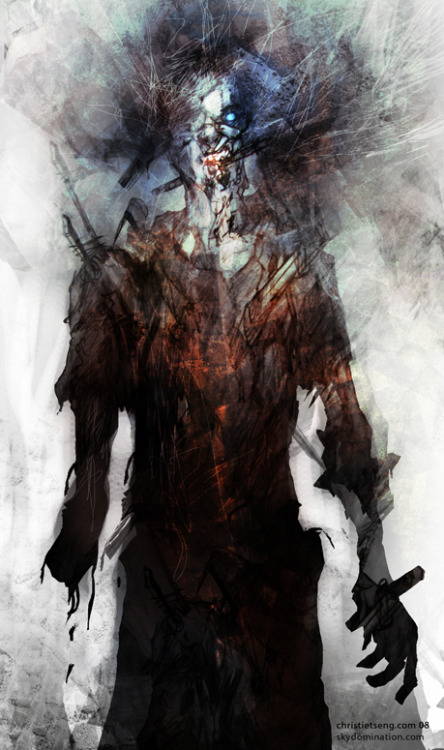 What were the other options on your patron? I'm liking the sound of this one, I'm just curious as to what else you had in mind!

the other option wAS:

klance monsters & mana AU comic! Not too sure about the plot yet, but this would probably be a bit shorter than the BoM comic. i could possibly do this one first, then the other??

here’s what i want from this comic:

-keith (sorry, THUNDERSTORM DARKNESS) with a real nice looking design. either a barbarian like christie tseng said, or a half-elf ranger like mitch iverson said. i am open to thoughts on which i should choose because i could make some real thirsty designs either way LOL

-PIKE GETTING A NEW GOSH DANG OUTFIT. monsters & mana is my favourite episode of the series i think? other than maybe beta traz. but pike’s design does him no justice!! i’m certainly no character designer but if they could make shiro and allura look That Stunning, my Beautiful Boy should get the same treatment!

-angst, since it is me. there are so many different possibilities for this it certainly won’t be hard to come up with scenarios for.  🤠✌