but no one looked for bucky 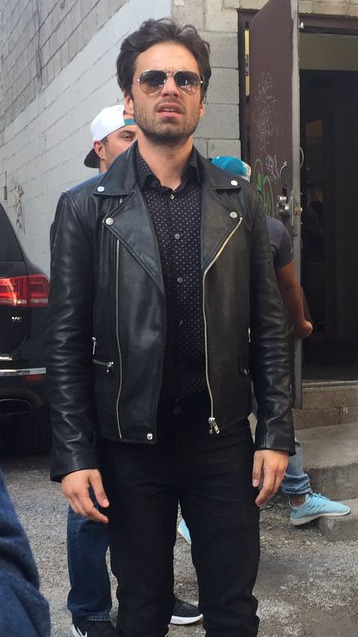 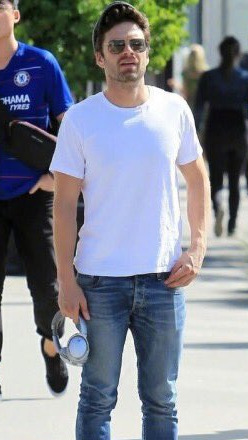 sebastian ‘where the hell am i?’ stan

So Bucky ships off and leaves this cute twink behind:

The next time he sees Steve he looks like this:

Then when his mind is his own again and he sees Steve once more he’s greeted by this guy here:

And then the next time he sees Steve after waking up from cryo he’s met with this:

You think maybe he’s a bit worried about letting Steve out of his sight again? 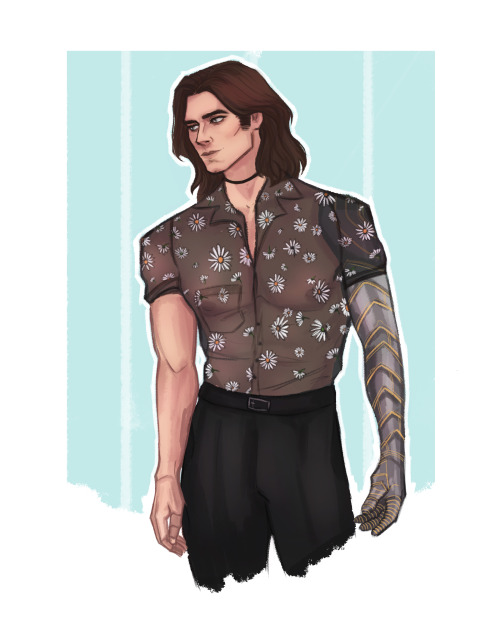 done for a friend’s birthday months ago 🥰

bucky barnesmarvelwinter soldiermyartartists on tumblrwhew looking at this one compared to my recent bucky in a mesh shirtis a tripconsidering there's about 4 months of progress between them
1,597 notes
Loading...Show more notes
Reblog 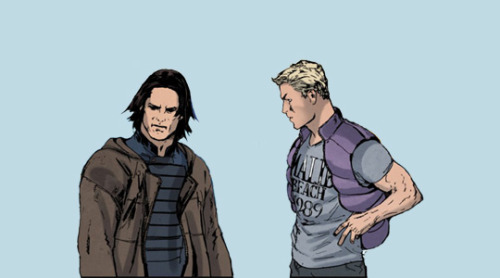 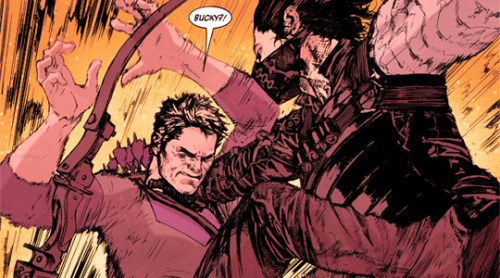 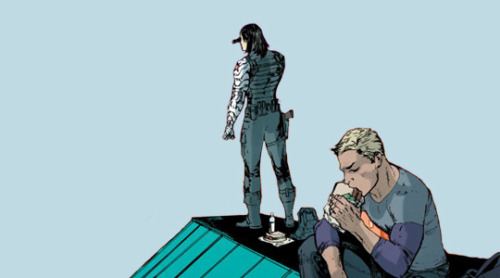 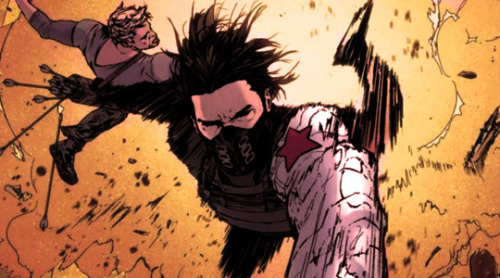 barton is good. very good. but he’s so annoying.

hawkeye and the winter soldier in tales of suspense

“Jesus.” The plate Tony was holding shattered across the kitchen floor when it slipped through his fingers. “Jesus, Steve sorry about that. Sorry.”

“I didn’t mean to startle you.” Steve said with a frown. “Are you alright?”

Tony shook his head.“It’s fine. Just lost a little in my head is all.” He bent down to start cleaning up the mess. “What do you need?”

“Let me help you clean that up.”

“Well, I was thinking maybe you could take a look at Bucky’s arm?” Steve asked hopefully. “It’s been freezing up or not flexing or something and it’s hurting him quite a bit. I told him you’d be happy to help him with it.”

“ Happy to help –” Tony cleared his throat. “That’s fine. But I’m busy, so send him to Banner. He’s got access to everything in the lab anyway.”

“I was hoping you would look at his arm specifically. Bruce isn’t as mechanically inclined as you are and I want Bucky to have the best.”

“I’m busy, Steve.” Tony wiped his hands on his pants and raised his eyebrows. “Banner is smarter than me anyway, he will find a fix faster than I can. Sorry, I just can’t right now. Sorry.”

“Uh, okay. I’ll just take him to Banner then.” Steve sent him an odd look, but turned and left anyway, and Tony sank down into a chair, sitting on his hands so it wasn’t quite as obvious they were shaking. 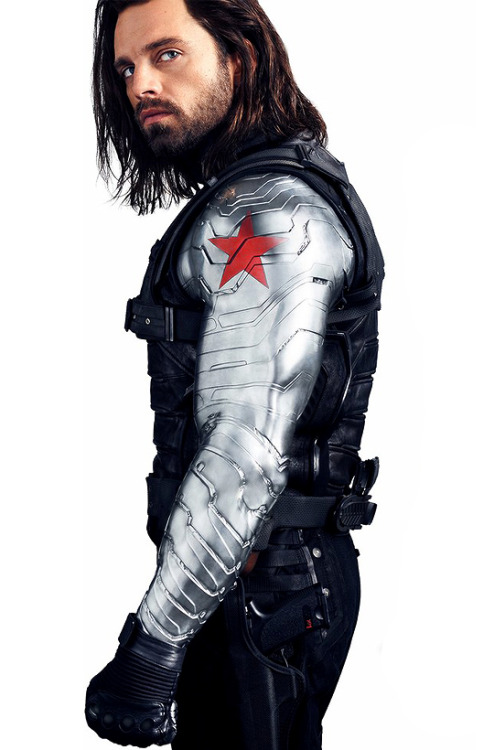 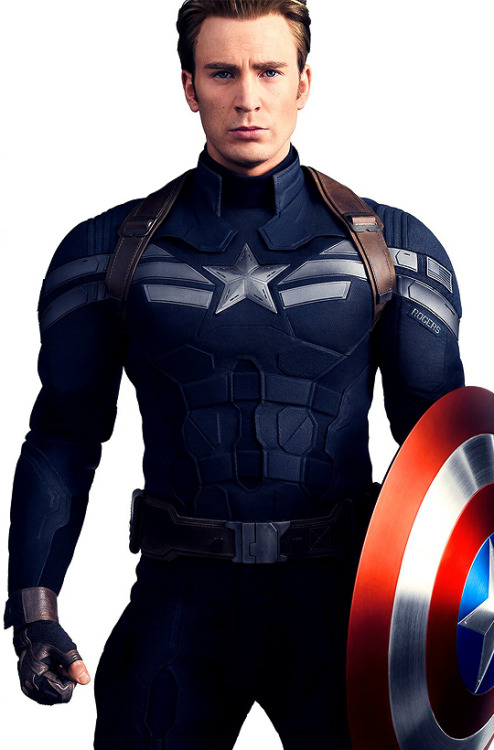 So obviously the clothes Bucky’s wearing in Civil War definitely aren’t his Winter Soldier “uniform” and I doubt he waited till he got to Romania to buy those, which means that shortly after the end of Winter Soldier, unless HYDRA somehow kept civilian clothes in his size on hand and he knew where they were (ya know, the boring option), either:

2) the world’s most wanted assassin walked into a clothing store in his full leather getup, a wad of “stolen” HYDRA cash clutched in his metal hand, and bought himself a pair of jeans and a couple of t-shirts

either way no one believed their stories when they tried to say they saw the Winter Soldierim really liking 2 tbhand I mean i don't think he'd want to steal so it's actually looking pretty likelymy posthumorbut also metabucky barneswinter soldiercaptain americacaptain america the winter soldiercatwscaptain america civil warcacwMarvelMCUstuckystevebucky
710 notes
Loading...Show more notes
Reblog
i don’t care if you have superstrength, it is logistically impossible to give hulk a piggyback ride
looking at you steveand peterit's okayyou can give dr banner onebucky barnesbucky king of memes
676 notes
Loading...Show more notes
Reblog

And just like that, we’re supposed to be cool?

buckybarneseditsamwilsoneditwintersoldiereditfalconeditdailymarvelfyeahmarvelmy gifsmcuLOOK AT THIS GROWTH Y'ALLso excited for this duoSO EXCITEDngl tho this was mostly an excuse to gif bucky with the gunone of the hottest things ive ever seen I MISSED SHORT HAIR BUCKY
522 notes
Loading...Show more notes
Reblog

So, I’m not going to include #1, because I already did that prompt in another story.

The Avengers are at the Tower for plot reasons. And just because I wanted it that way. Deal with it LOL.

Bucky rubbed his eyes awake as FRIDAY announced that he was receiving an incoming phone call. He glanced at the clock on his nightstand and it read 2AM.

“Accept,” he muttered huskily to the AI.

“Wait, FRIDAY, no, no, no!” The call immediately came in.

He expected it to be Steve, who was on a mission with the entire team. It left Bucky as the sole “superhero” left in the tower. But he didn’t see himself as such. Bucky was crashing at the high-rise because he really had no place else to go. And he knew Steve would be disappointed if Bucky didn’t take him up on the offer.

He squinted and then put it together. “Y/N, is that you?”

Y/N was Happy’s niece. Tony and Pepper were basically her aunt and uncle without being related. She lived in the city, and therefore was around the tower a lot. Pepper was constantly inviting her over for dinner. Sometimes she’d do her laundry there. If Tony ever had a party, she was invited. The rest of the team had befriended her. 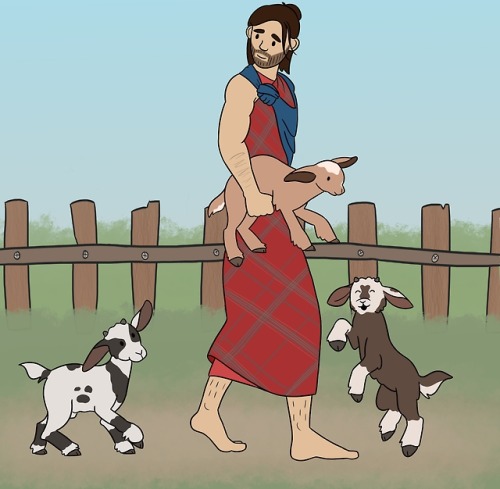 bucky when thanos comes for the entire planet: snzzzbucky when he realises the entire planet includes his goats: >:(bucky barnesinfinity war spoilersi guess aksjdhkjasspoiler alert: goatsriver drawswhat we're not gonna do is focus on his right foot which looks like buttshitinstead we're gonna appreciate his left foot which i'm very proud ofi tried a different take on drawing his beard and i feel like this one is better
575 notes
Loading...Show more notes
Reblog 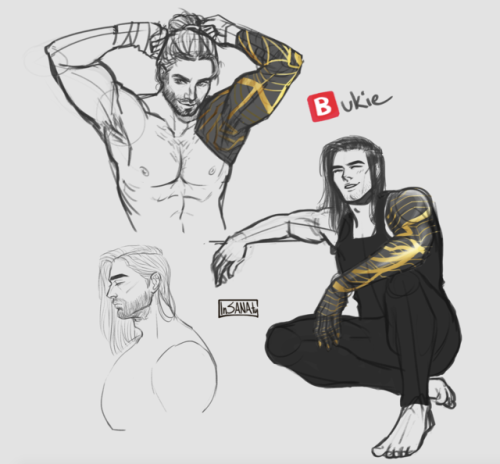 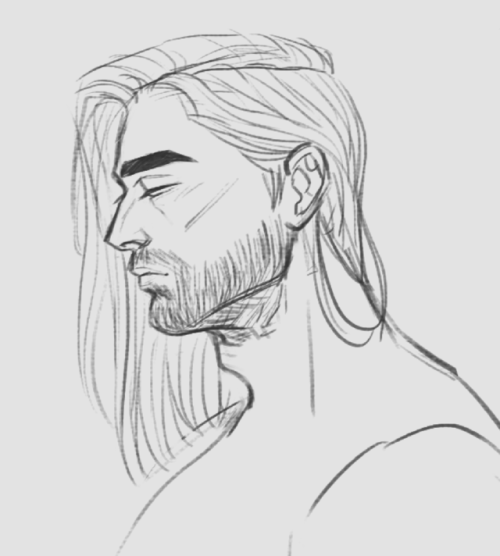 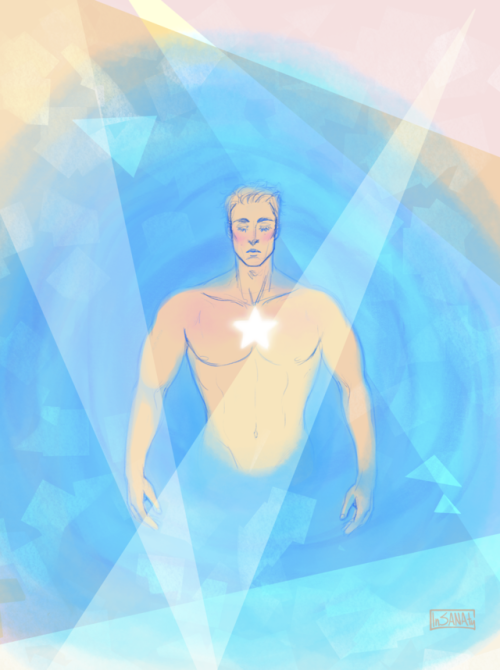 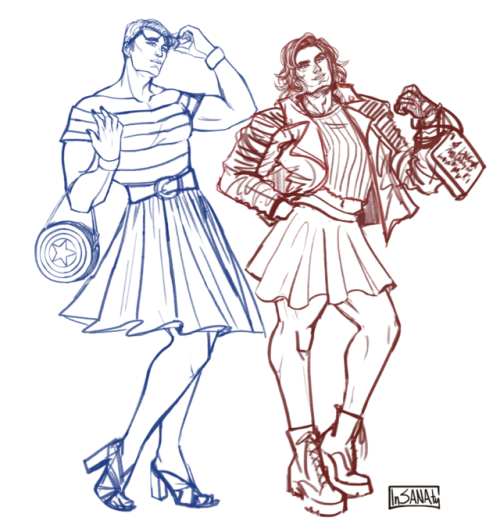 keeping my promise to post more sketches!!! heres some misc doodles from the past few months, playing around with style and Style™ (･ω<)☆

steve rogersbucky barnesstuckymarvel fanartinsanartwipartproblemsquadLOOK MA IM POSTING THINGS!!!the buckos were right after the infinity war trailer dropped and i wanted to draw his new arm *u*the floaty steve is weird and idk what i was goin for but the colors are nicelast one is from the disneybound challenge on twitter!(aka draw the char in their respective disneybound inspired outfit)i managed to finish steve before losing steam loli have yet to finish coloring bucky but once i do i'll post both of the finished ones togetherdisneybound challenge
514 notes
Loading...Show more notes
Reblog
Lovedust || Peter Parker x Stark Reader

Summary: Y/N and Peter have always hated each other but when Y/N discovers an element that can make people fall in love, her whole relationship flips upside down.

Author’s Note: I’m still working on the last part to thin ice but I’ve had the idea of a love potion series for Peter and since we’re in quarantine, I said fuck it. I’m such a sucker for an enemy to love type thing so this is great cause technically it’s a slowburn but not at the same time! Also Y/N is ADOPTED cause duh of course she is. Let me know if you want to be added to the taglist!

dog tags & storage units - two things in this world belong to bucky. his tags, and you.

teacher of mine - professor barnes looked that good, and you were expected to NOT jump his bones?

ready to comply, to you - the winter soldier gets triggered to come out and play, but instead of taking orders from the one who sets it off, bucky stays obedient to the reader.

winter’s child has a gun - in which blood is thicker than water, but one is easier to drown in.