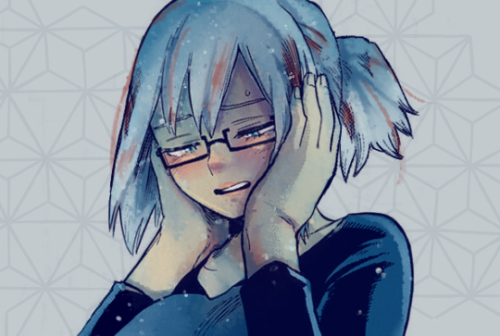 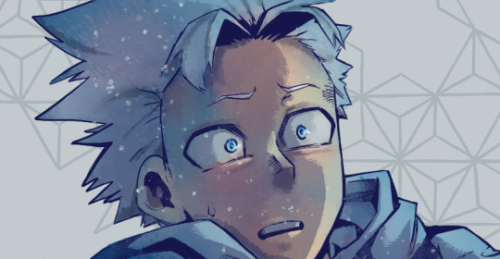 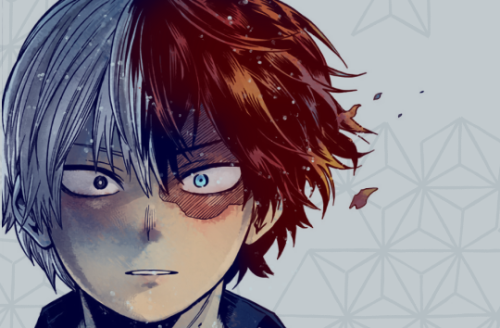 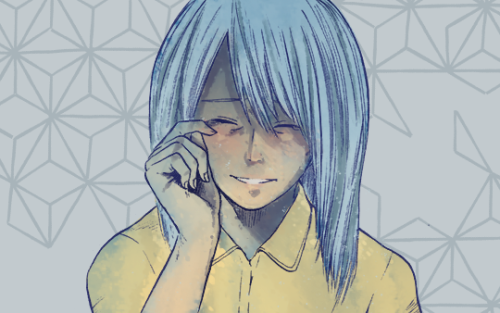 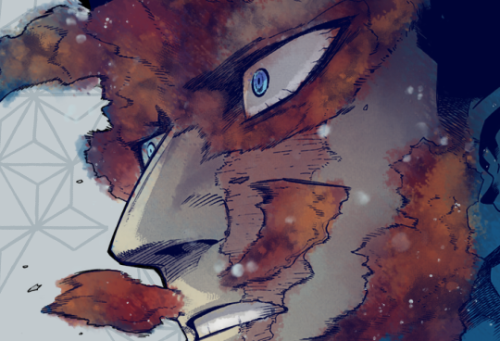 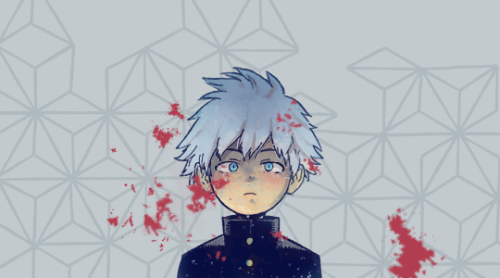 I made this as a way to refine my painting and under painting technique a bit! it was really interesting to work with a lot of blues and try to work them into skintones. These characters were perfect to do it, lol.

Bakugou: Just trust me. Have I ever put you in an unsafe or uncomfortable situation?

Sero: Literally all the time!?

Bakugou: Then you should be used to it by now, bitchboy. 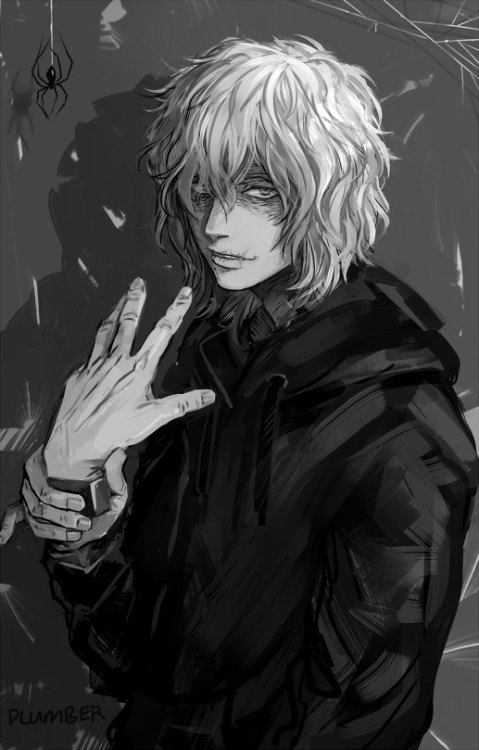 Just everything about Shoto’s face is priceless to me

“..Deep down, he doesn’t take himself into account, y’know? He’s always been like that and now that he can do so much more… Something doesn’t feel right, it makes me wanna keep him at arm’s length. Back then, I ignored my own weakness.. so I ended up bullying him.” “But now you’re sincerely helping out with his training. That’s your way of trying to atone.. right?”

bnha 284bnha 284 spoilersbnhamhakatsudekubakudekuktdkbkdkboku no hero academiamy hero academiai wanted to do it in 5 parts but ended up doing 4its been a long time since ive done this kind of editim still not over this chapter tbh ;;tysm horiiiimy edit
379 notes
Loading...Show more notes
Reblog

rough sketch of some tiny krbks 💣 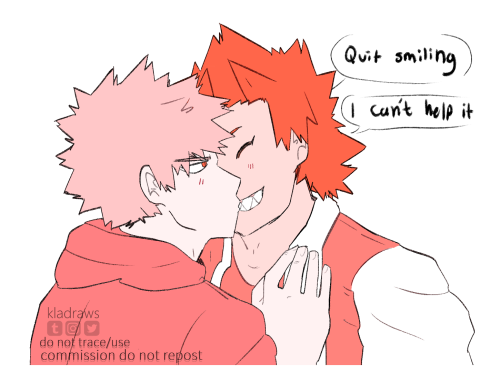 Commission for the lovely @ao3-deviance, based on their fanfic Smile!

Get your own through my ko-fi !

Yes, this is a quote from Despicable Me

seeking comfort in the wrong hands

So, I absolutely adore this fanfic, and this scene from chapter 7 is one that warms my heart just imagining it.

@lefleurgalaxy I can’t wait to read more chapters!!! Hope u like it ❤

Shinsou confessing: I wanna fw you. Like officially. Yk what I'm saying?

words from the pimp: hope you don’t mind that I made this a scenario👀

when shinsou confesses, it’s at random like his heart and mind suddenly decided that he couldn’t hold it in anymore or he didn’t want to or even had to. When he confesses it’s not in person, it’s through your usual facetime calls late at night on a Saturday this time there was a thunderstorm that rattled against both your windows with an occasional burst of light following a growl of thunder

It’s in the comfortable silence that fell between you two, after an hour of a twisted but fun conversatio, that he calls your name and when he knows you’re listening he goes, “I wanna fuck with you y/n..for real”.

His voice is unusually soft, that’s how you know he’s being serious. When Shinsou talks his deep voice is always laced with confidence, slyness, and a hint of mischievousness but this time none of that was present. His voice was timid almost so that over the rain you barely caught it. There’s so much vulnerability entwined in his few words but also heavily saturated in honesty leaving no room for you to doubt him.

His confession it’s nothing romantic, not at first glance yet Shinsou feels he doesn’t need to use words he’s only ever seen in literature books and classical novels to convey what he feels and what he’s been feeling for months. It’s a term that the two of you sometimes exchanged to convey your appreciation for each other, for your friendship, and in just one moment of time Shinsou completely erased its previous meaning now giving it a brand new one.

And you’re okay with it, in fact, you’re stunned to silence as an overwhelming feeling of both relief and pure joy fills you entirely. But Shinsou takes your silence as rejection and in your silence he breaks it again with a chuckle that only a fool would believe was genuine.

“Yeah..I had a feeling I was doing too much” God he could feel his heart start to shatter and if he knew that it would sting so much like alcohol on an open wound he wouldn’t have said a word

some bakusquad for the soul

[Years in the future]

Priest: Do you, Kaminari Denki, Take Jirou Kyouka to be your lawfully wedded wife?

Jirou: I want a divorce.

still waiting for deku to just pull out the strap

cc request for the best bois being cute 🥺

|&&|: 💖🥰 hope you chill to your fullest before and between classes! Hcs Yan Hawks falls in love with college student that he rescued bc u tell him to rest/drink water/chill. But ur tunnel vision is on acads/career, so u think all his advances are just “what bros do” and u just give him face masks or fruits and tell him to take a vacation. U bro zone and selfcare-zone him while u beastmode acads until he snaps and takes u to bed. Thanks so much huhu💕

✧; you are, for lack of a better word, odd. you’re cute, like, heart-pounding, pulse-racing kind of cute, don’t get him wrong, but you’re still a little strange. how else can he explain the fact that you’re more concerned about him—him being a pro, and a top ranking one at that—when you were just on the cusp of knocking on death’s front door. one would think that nearly getting squashed to bloody little pieces by falling debris would inject some well-deserved fear in you, but instead while he’s hauling ass to get you to safety, you’re peering up at him with an inquisitive sort of gleam in your doe-eyes. he has to strain to hear you above the cacophony reverberating loud and clear in every direction when you tilt your head and ask him if he’s alright. ‘course I am, sweetheart, he shoots back without so much as a beat of hesitation, don’t worry about me—let’s just get you off the frontlines, okay! and he does just that in no time flat, setting you down right on the very edges of the skirmish currently enveloping a good portion of the downtown area in spates of wreckage. now just follow everyone else and try to evacuate as quickly as possible. got that, sweetheart? he gives you an assuring smile and a coquettish wink to top it all off as he ushers you in the direction of the streams of citizens scurrying away in droves. though in the back of his mind he’s a touch skeptical of the way you’re staring at him, like you’re peeling back all of his layers to peer right inside. before you can get another word in, a deafening explosion rips away his attention from your delicate, too delicate face. and belatedly he thinks that was a pretty unusual exchange, but that only serves to pique his curiosity—you’re an interesting thing, aren’t you.