For a little while, the pizza-delivery people in my neighbourhood would drive these specialized one-off cars as part of their delivery service. Eventually, the franchisees must have revolted when they realized how insane paying for all this bespoke goodness after every fender bender was. So the delivery staff are now all driving cute little electric mopeds. Ah, to zing silently through the residential streets, dragging your knee through the tight off-camber blind corner of a playground zone - that’s the romance of ‘za delivery in our modern times.

Recently, due to an employer figuring out what kind of human being I actually am, I was out on my ass, money-wise. Initially, I believed the firing was prejudicial - even though my personality is repulsive it is effectively an unchangeable attribute of my nature and it’s not right to discriminate based on it. All the lawyers I visited didn’t agree, and one of them even threatened me not to try a slip-and-fall scam in his parking lot because he’d hire some thugs to burn my house down. Who says I’m not a job creator?

So, without any viable employment prospects, and thoroughly tantalized by the prospect of low-miles electric mopeds, I signed on with the pizza delivery corps. All they had to see was something that looked like a drivers’ license - my Rhodesian motor-vehicle permit is still in excellent standing for only $12 a year in bitcoins sent to some dude who calls himself MrWheels69 - and I was already getting some sweet, sweet minimum-wage hours.

What’s more, my new boss Sean told me that the franchise was extremely strict on delivery times, so I had to make sure to get those deliveries done in 30 minutes or less. This was an implicit invitation to speed through residential neighbourhoods and test the suspension of my new company-provided vehicle. Why hadn’t I done this before, other than the fact it would barely cover my rent? I spent that first magical night ramping my bike off of “traffic-calming” roundabouts and curbs, knowing that if i blew out a fork seal or two that Sean would just have to accept it as part of the cost of doing business. None of my customers complained about my speed. Sure, maybe they got a little upset when I ripped a donut on their front lawn, chucking hunks of sod through their picture window - but I think they accepted it as part of the cost of returning the economy to its former glory. We all gotta make sacrifices, I said to myself on a break, while wondering if swapping out the main battery wiring for a thicker gauge would meaningfully improve my 0-60 or just melt the contactor that much faster.

It didn’t last. Surprisingly, it was one of the few jobs that didn’t fire me or spontaneously move offices without telling me where they moved to. After a few weeks, I picked up a new job working in a boring building with computers again. However, the experience had changed me. Now I knew the secret to workplace productivity and efficiency lay in the humble electric moped. And without an internal combustion engine, it was perfectly safe to use it in an office setting. I just wish the elevators at work were a little bigger because it’s seriously impacting my ability to do smooth donuts. 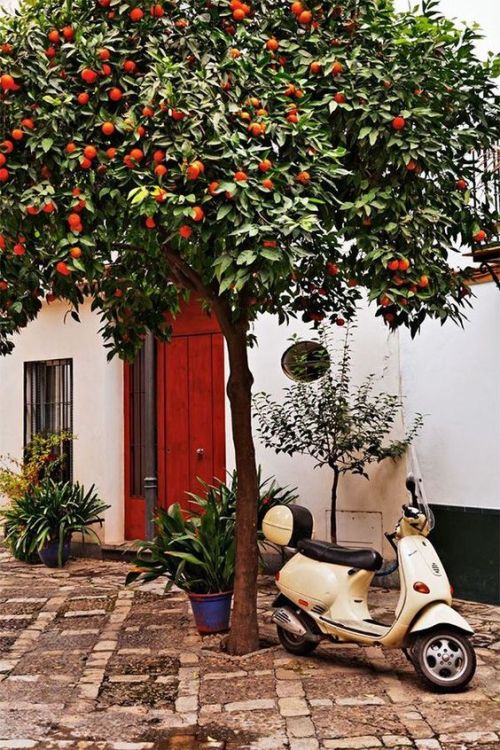 Okay so I have a real question:

Is it safer to drive a car or a moped ( hope that’s spelled right)?

I’ve got the chance to get my drivers licenses soon but I have extreme car anxiety when it comes to driving thanks to some car crashes I’ve been in. It kinda puts my into a fight or flight mindset, sorta like a deer in headlights.

I however am perfectly okay with driving bikes and what not, so may parents suggested maybe getting me a moped to drive instead of a car.

I live in the country and only really need it to drive from work and home… anyone got info? 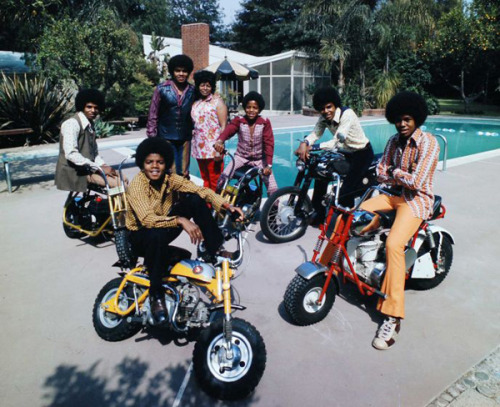 My city has a whole new electric scooter rental thing going on. These Silicon Valley cyborgs came down from the Cloud. In their weird binary moon language, they handed down their commandment to us. They decided that what we needed to do was to ride tiny, unpredictable electric motors with no suspension at high speed on city sidewalks.

Of course, nobody wore helmets, because helmets are for dorks. Just like condoms, seatbelts, safeties on handguns and assless leather chaps. Fads are bad for my city; my fellow townsfolk don’t deal well with change. On that first glorious week, the sidewalks were slick with blood. Gristle and teeth flowed along the gutters and into the sewer. All the corpses reminded me of when rolled ice cream briefly became “a thing.” I looked upon the piles of the dead as I tooted past on my French moped, and scoffed.

Although my oh-so-chic Italian half-helmet would do barely anything to protect me in the case of literally any accident, I knew that I was a Responsible Road User. This stood me in stark contrast to the gangs of half-feral businessmen who were now riding a torquey children’s toy to and from their important foreclosures.

Turning the corner towards my temp job, I put my knee down in the pattern that I had learned from my favourite Moto GP stars. For a brief moment, I felt that exhilarating rush of perfect dynamic balance, clipped the apex, the perfect racing line. Then I saw it. I stood on the brakes and jerked my posture upright - too quickly - and lowsided the moped, both it and I tracing separate arcs as we skidded across the harsh tarmac of the Economic Crimes Exclusion Zone.

My then-boss was there, atop a mountain of stolen rental scooters, caked with gore and mats of hair. On his head was an improvised crown made of men’s clavicles. Seeing all this carnage must have broken something deep inside him. He was no longer a man: in this apocalypse, he had become Lord Arbitrage.

We came home to a stinky Blk Blk house! by heather rosner 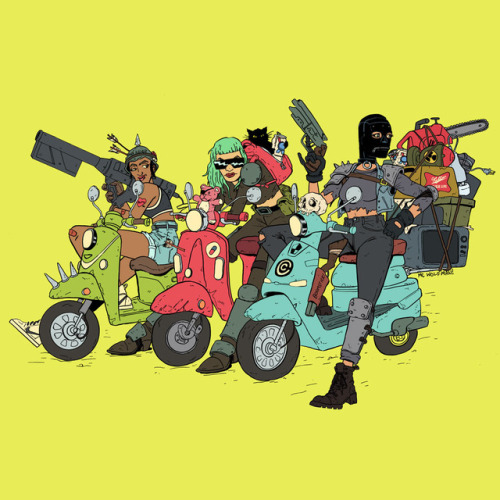 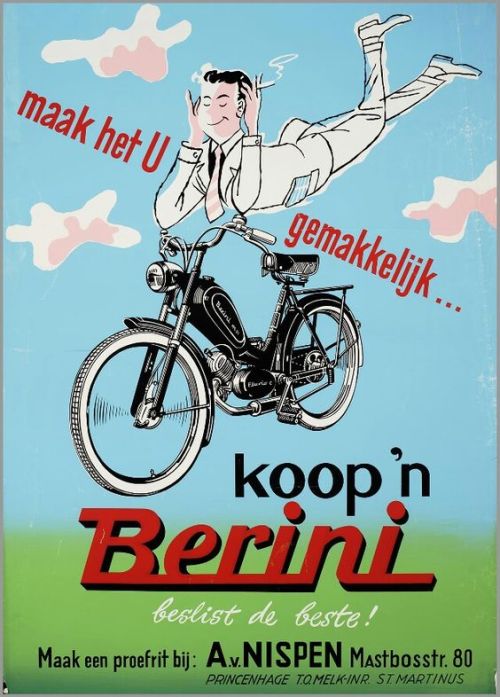 Just got a new moped, my pop got it for me. He thinks it’s gonna make me ‘less gay’.

When you live out in the country, it’s hard for your neighbours to bother you. You hardly ever see them, and when they do come into visible range, you have a lot of time to prepare a method to get rid of them before they can come close enough to threaten you. I, however, live in the city, where it doesn’t take several hours of driving to reach minimum literacy distance. As a result, I have to put up with a lot of bullshit from my neighbours.

A few months ago, a kid down the block figured out that he could drill holes in the muffler of his ancient Golf to make it louder. Louder, and therefore better. Now, I’m no exhaust-hating prude: everything I own is straight-piped, and the last time a cop tried to pull out a decibel meter on the roadside, I voided the warranty on it. It’s just that I have standards, and the choking-narwhal blare of the Volkswagen 2-litre’s buck-forty horsepower trying to make it up the hill outside my house doesn’t qualify.

On top of that, since it’s spring now, the weird guy down the block who has his generator-motor-powered DIY motorized bicycle is taking it for rips up and down the street again. Presumably, he is trying to tune it so he can prepare for a drag race with an electric wheelchair or a particularly competitive speed-walker. It would be a lot better if the thing had some semblance of gearing, or if he wasn’t obviously completely deaf. As it is, he drives the thing everywhere with the throttle pegged, even on the sidewalk and into the little dog park at the bottom of the hill. The flat barking howl of its zero-point-zero cc pot-metal science project of a block is somehow the ideal frequency to penetrate the glass and walls of my home, so you can hear it in literally every room.

I wish they didn’t keep rubbing it in. My open-header Chevette hasn’t fucking run in weeks.

What I’ve learned from my trip abroad to France. 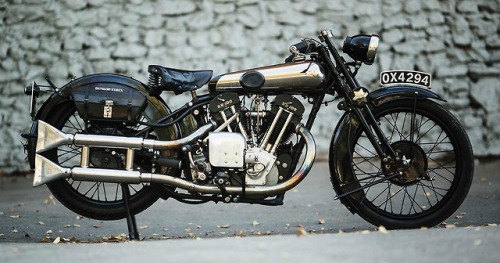 A Brough Superior SS100 surfaces in deepest Russia https://ift.tt/2NIzaed Over 2,500 miles from the Nottingham factory where it was built 88 years ago.

Driving through the windy roads in Pai.   Enjoying the views and the wind in our hair! 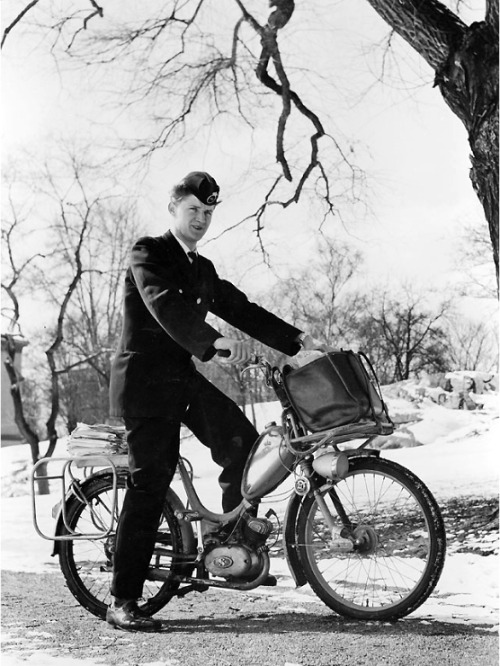